India is heading towards a second consecutive Test defeat at home against a professional English unit led by Skipper Alastair Cook at the Eden Gardens. A dramatic afternoon session fast forwarded the match towards a possibly innings defeat for the hosts but R Ashwin’s beautiful knock in the final session helped them to avoid that and has taken the match into the final day.

India is heading towards a second consecutive Test defeat at home against a professional English unit led by Skipper Alastair Cook at the Eden Gardens. A dramatic afternoon session fast forwarded the match towards a possibly innings defeat for the hosts but R Ashwin’s beautiful knock in the final session helped them to avoid that and has taken the match into the final day. India are on the brink of an inevitable defeat with an overall lead of just 32 runs with only the last pair of Ashwin and Ojha hanging on.

Despite being six down, there was some hope of a fightback in the final session from India as Virat Kohli was looking determined. Kohli was sound in defence but a momentary lapse in concentration saw him edging a fancy cover drive on the up to a juicy full length away swinger from Steven Finn. Kohli (20 from 60 balls) was caught edging the drive as Finn got the ball to reverse away at pace to leave the hosts at 155 for 7. Zaheer Khan was dismissed for a duck by the same bowler with a fast and full length inswinger that had him trapped deep back in the crease. 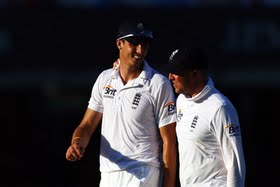 Just when everyone thought the match was just about to get wrapped up by stumps, came a stubborn partnership between the defensive Ishant Sharma and the VVS Laxman dupe – R Ashwin. The pair batted through for 18 overs to frustrate the English players. While Ashwin stroked the ball sweetly both on frontfoot and backfoot, Ishant was blocking and blocking calmly. Eventually, the 9th wicket stand was broken by an unlucky Monty Panesar who tossed it up and got it into the blockhole to clean up the off stump of Ishant Sharma (10 from 53 balls) who was into an expansive cover drive. Ashwin who had gone past a 3rd Test match fifty got nice support from no.11 Pragyan Ojha (3* from 21 balls) as well to take his fight into the final day.

Ashwin remained unbeaten on 83 (from 151 balls with 13 fours), a knock that could save his place in the team for now and also pave his way as a regular all-rounder at no.6. The tall off-spinner was very sweet with his timing and a lot of his shots resembled that of the retired VVS Laxman. Thanks to Ashwin’s gritty knock, India closed the penultimate day at 239 for 9 in 83 overs.

Tea on Day 4: England have bounced back strongly after the hammering they took in the morning session to have India staring at a certain defeat by taking as many as six wickets in a dramatic post lunch session at the Eden Gardens.

The very first ball after lunch saw Graeme Swann claiming a classical off spinner dismissal when his flighted off break beat the cover drive from the dangerous Sehwag (49 from 57 balls with 7 fours) and got him bowled through the gate. India was still in a good position at 86 for 1 in the 22nd over when the young no.3 Cheteshwar Pujara walked in and tried to continue the aggression. However, Pujara (8) was soon back in the hutch through a run out after being wrongly called by a nervous Gambhir for a single from mid wicket where Ian Bell came up with a direct throw. This was the second run out caused by Gambhir’s poor calling in this Test match. In the first innings, he had Sehwag run out because of his miscommunication which perhaps is the turning point of the match.

Gambhir couldn’t make amends for his costly mistakes and soon edged a square drive off an away swinging yorker from Steven Finn to the diving Matt Prior as India slipped to 103 for 3. Sachin Tendulkar (5 from 6 balls) may have played his last Test innings as he failed to read a bouncy straighter one from Swann and edged it tamely like a rookie batsman to slip. Yuvraj Singh (11) also sealed his fate like the little master though he was unlucky as a short of length ball from Anderson shot very low to clean up his off stump. India’s Skipper MS Dhoni was edged out on the backfoot by an away swinger by the same bowler to make it 122 for 6. Dhoni’s place in the test team is now certain to come under the scanner. At 145 for 6 in 51 overs at Tea, India are on their way of an innings defeat with still 62 runs needed to make England bat again.

Lunch on Day 4: The Eden Gardens Test Match has opened up suddenly because of a terrific onslaught from the Indian openers! India have cut down the deficit down to 121 runs and have got all their 10 wickets intact going into lunch. This was after bowling out England for 523 runs and then ending the morning session on a strong note at 86 for no loss in 21 overs.

It was a quick wrap up for India this morning as England lost its remaining four wickets adding only 14 more runs in the space of 27 balls! First to go was Swann edging his cover drive to slip off a turning delivery from Pragyan Ojha in just the second ball of the morning. Prior went in the next over edging his square cut off Zaheer to the keeper. The last two wickets were taken in consecutive deliveries by Ashwin – with Anderson edging a turning off break to slip with his forward defence and last man Monty Panesar wrongly given out lbw after inside edging a flighted yorker onto the pad.

England were bowled out for 523 in 167.3 overs to end up with a first innings lead of 207 runs. India then started off in a decent manner to move to 32 for no loss in 10 overs. Sehwag would have got out in this period when he edged Anderson on the backfoot but got away with the first and second slip fielders not able to take the catch between them. Something changed dramatically after drinks, especially after the introduction of Samit Patel for a 1-over spell. Sehwag began to free his arms and dictate terms to the English spinners and by the end of the session, Gautam Gambhir went berserk taking on Monty Panesar. Gambhir is on 33* (from 70 balls with 3 fours and a six) while Sehwag who has hurt his knee in the session has raced away to 49* (from 56 balls with 7 fours).

Build Up to Day 4: We are already into the penultimate day of the Third Test at Kolkata and England are still not finished with their first innings. Although they are in the driver’s seat with a lead of 193 runs, England seem to have taken too long to reach their total of 509 for 6. The visitors would perhaps need to get some more runs so that they have a lesser target to chase in the fourth innings on what is now a spinning surface.

Now that it is inevitable that India will be batting anytime in the morning session probably, all eyes will be on its batsmen on how they can save the nation’s pride. Each and every batsman in the Indian line-up including Cheteshwar Pujara will be under pressure to play a good knock to prove themselves.