Michael Clarke: Giving leading from the front a new meaning

En route to his fifth century of the calendar year, in the ongoing Boxing Day Test against Sri Lanka at Melbourne Cricket Ground (MCG), Aussie skipper Michael Clarke created history, setting a new record for the most number of Test runs scored by an Australian in a calendar year.

En route to his fifth century of the calendar year, in the ongoing Boxing Day Test against Sri Lanka at Melbourne Cricket Ground (MCG), Aussie skipper Michael Clarke created history, setting a new record for the most number of Test runs scored by an Australian in a calendar year. In 11 Tests so far, Clarke has notched up 1595 runs at an exceptional average of 106.33. These figures comprise three half-centuries as well and a mammoth highest score of 329 not out, which was registered against India.

Clarke took over the record from his predecessor Ricky Ponting, who had notched up 1544 runs in 2005 at an average of 67.13, with six hundreds. In a sense, Clarke’s performance symbolises Australia moving over from the Ponting era. Ever since Clarke has taken over as captain he has been a completely transformed batsman. Of course, he was a highly consistent performer before taking over the responsibility as well but since taking over as leader he has moved into a zone of his own. Instead of viewing the captaincy as a burden, he has instead taken it as a great honour, and the pride in his game is even more pronounced now. 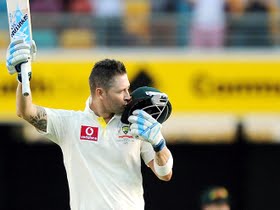 Till a couple of seasons back, Clarke was content getting the big hundred in every second or third series. He never lookedperturbed even if he fell after getting a start and wasting an opportunity. Those who have season Clarke in action this year though will pose the following question -- are you talking about Australian captain Michael Clarke? Yes, we indeed are. The difference in approach has only come with added responsibility-- and not burden, as some captains in world cricket feel it is –and results are there for everyone to see this season.

Starting with the India series at home, which was a major challenge for Australia considering they had lost Tests to South Africa and even New Zealand last season, Clarke has been sensational to say the very least. He notched up a double as well as a triple hundred in the four-Test series against India, and was instrumental in handing India another drubbing 4-0, akin to the one they faced against England. The Aussie captain did not rest on his laurels and continued his excellent work against the South Africans as well. It was quite a shame that Australia ended up losing the series in spite of Clarke notching up two more double hundreds during the course of the series. The verdict though had more to do with the quality of the opponents and the overall shortcomings of his team than Clarke’s lack of effort.

With the latest hundred against Sri Lanka, Clarke has all but ensured that Australia will go 2-0 up in the home series. Hopefully, for Clarke there won’t be a reversal this time. These are still very early days in Clarke’s career. But, from what has been on display till now, he has all the makings of an all-time great leader and batsman.