South Africa have the edge over Australia

Finally after countless T20s, we are going to see the real hardcore cricket action as Australia and South Africa begin their 3-match Test Series at the Gabba in Brisbane tomorrow. South Africa, who are the new World No.1 Test Team, certainly have the edge over the Aussies. Batting and Bowling, South Africa are a lot stronger than the Aussies who are a different team after the exit of greats like Warne, McGrath and Hayden. 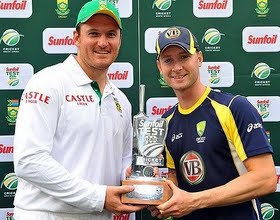 The last Test Series between the two teams in Australia was a cracker with all the three matches producing results. Skipper Graeme Smith led the Proteas to its first ever Test Series win in Australia. They will be the favourites going into the 3-match Test Series tomorrow over the Michael Clarke led Australia.

The South Africans have a gem of a bowler in Vernon Philander who with the duo of Dale Steyn and Morne Morkel can be devastating on an Australian batting line-up that heavily depends on Skipper Michael Clarke. Ricky Ponting and Michael Hussey are the old warhorses who are not at their peak. The Aussies have suffered a big blow with Shane Watson missing out with an injury yet again! Well with David Warner, Ed Cowan, Rob Quiney and Matthew Wade yet to prove themselves at this level, the Australian batting does look slightly vulnerable in comparison to that of the visitors.

Australia will have to pull off something amazing to beat the Proteas. For starters, the hosts should pray that Hashim Amla and Jacques Kallis do not get going at all in what is a very short 3-Test Series. The pitch at the Gabba in Brisbane will not be too quick and bouncy. It is likely to have true bounce and little lateral movement to assist the batsmen while the pitch could take turn gradually because of its possible dry nature. There could be swing on offer for the fast bowlers with the conditions at Brisbane expected to be cloudy.