Where will Australia turn after the Chennai defeat?

Australia can’t say they weren’t warned. Long before this 2013 Border/Gavaskar test series commenced, pundits were pointing out that the visitors needed to be wary of the spin threat. “Trial by spin” was a common refrain.

Australia can’t say they weren’t warned. Long before this 2013 Border/Gavaskar test series commenced, pundits were pointing out that the visitors needed to be wary of the spin threat. “Trial by spin” was a common refrain. The plans of the hosts were never a secret; cricket strategy – except, it could be argued, for the Bodyline series -- never really are. Playing in India, opponents know they will be confronted by a battery of spinners on turning pitches and a line of gluttonous batsmen seasonedin such conditions.

Few teams have managed to overcome this searching and unfamiliar examination – you can prepare for a coming hardship but it can still be so unremitting as to overpower you. Of the 133 overs of the Australian first innings only 30 were bowled by the seamers, and the visiting batsmen never faced an over of pace in their second innings, until Ishant Sharma came on to deliver the 76th over. And his three overs 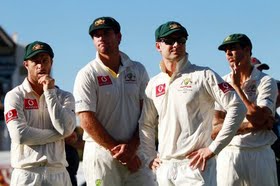 For reasons best known to them, Australia chose to go into a test match on a surface they knew would turn, against opponents staffed with three slow bowlers, with only one spinner in their eleven, despite having another in the squad. Xavier Doherty did not set the world on fire when he got the opportunity during the 2010/11 Ashes, but if he is good enough to tour then he has to be good enough to play in some of the friendliest conditions he might encounter in his career. And as former United States Secretary of Defence Donald Rumsfeld infamously said, “you go to war with the army you have.”

This is not to say that Australia would have won or done better had he played at Chennai. But Mitchell Starc and Peter Siddle took a single wicket between them for 141 runs in the first innings. Doherty could hardly have done any worse.

Last November, England made the egregious error of going into the first test at Ahmedabad with Graham Swann as the only spinner, leaving Monty Panesar on the sidelines. Chastened by a nine-wicket defeat, they inserted him for the test at Mumbai and won the game by ten wickets. It is a lesson Australia should make sure they learn. It doesn’t mean they will win the second test in Hyderabad, but including the left-arm spinner might just improve their chances. It has to be worth a try.

Apart from captain Michael Clarke and all-rounder MoisesHenriques no Australian batsman suggested any kind of longevity at the crease. David Warner scratched out 59 in the first innings but could have fallen to a large number of the 93 balls he eventually faced. Only the very gifted are able to dance to spin bowling’s tune like Clarke and only the very confident would dare try, but the other batsmen need to work out a better approach, and Henriques’ less mobile but assertive method might be worth emulating.

The Australians should also consider whether it would not serve the team better for their captain and best batsman to move higher up the order. Clarke currently occupies the number five spot and might understandably be reluctant to move in view of the mountain of runs he has gathered from that position. But operating from one slot higher, or maybe even from number three for the rest of this series could possibly allow him to have a bigger say in the direction of his side’s innings.

Of course Australia could do everything suggested here and still lose the remaining three matches. And it will not necessarily be that India has the better team, only that it had the more effective weapons in the prevailing conditions; much like Australia did with their hotter pace on high bouncing surfaces when India last visited. And just like the hosts dished out a 4-0 drubbing then, India will be looking to administer a clean-sweep this time round.