Sri Lanka went into the second ODI of the series against Colombo knowing well that they had to win to give themselves a decent chance of ending up triumphant in the series. And, they did so in rather emphatic fashion.

Sri Lanka went into the second ODI of the series against Colombo knowing well that they had to win to give themselves a decent chance of ending up triumphant in the series. And, they did so in rather emphatic fashion. Batting first, their batsmen ensured that the hosts put up enough runs on the board to give their bowlers a fair chance of winning the match. The bowling them combined well to ensure that Australia were always behind in the chase. In fact, they never allowed the Aussies to dominate at any stage. For the visitors, it was more a case of déjà vu as the batsmen struggled, like in the Tests.

In the context of the match, the partnership between skipper Angelo Mathews and Kusal Perera was significant for Sri Lanka and lifted them from a competitive total to a match-winning one. When the duo joined forces at the crease, Sri Lanka were not in a completely comfortable position at 158 for 5. It was a stage from where they could have faltered and marched on. The duo chose the later and ended up putting Sri Lanka in an excellent position to win. What stood out about Mathews and Perera was the manner in which they took on the Australian bowlers, and came out on top. It was a tricky position, but the Lankan duo had the confidence to come up trumps.

Before the Mathews-Perera stand, there was another crucial alliance between Dinesh Chandimal and another Kusal -- Mendis. This was the stand that aided Sri Lanka in recovering after a poor start. Danushka Gunathilaka and Tillakaratne Dilshan both fell cheaply, to leave the Lankans in trouble at 12 for 2. But, Chandimal and Mendis did a very good recovery job to take the team to 137 before the third wicket fell. Chandimal's strike rate of just over 71 was again a worry, but Mendis ensured there was no dip in the scoring with a run-a-ball half century. Australia fought back well after that, but Lanka's recovered too.

For Australia to have a chance in the tough chase, it was important for them to get off to a good start. But, that wasn't to be the case. Sri Lanka's decision to open with Thisara Perera, who is nothing more than a friendly medium pacer, proved to be a masterstroke. Knowing they were facing a bowler without much pedigree would have enticed the openers Aaron Finch and David Warner to go after him. But, it was Perera who had the last laugh as he dismissed both the batsmen cheaply. Australia found it difficult to recover from that point. They needed the likes of skipper Steven Smith and George Bailey to play significant knocks, but both fell after getting starts. 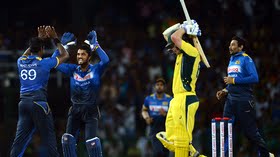 Spin again proved to be Australia's undoing. While Perera got the early strikes, it was Amila Aponso who broke the back of the Aussie batting with his four-for. Aponso dismissed Smith, Bailey and James Faulkner as well, whose hat-trick earlier in the day went rather unnoticed. Matthew Wade batted with purpose for his 76, but he was always delaying the inevitable. The fact that Wade hit only three fours proves how frugal the Lankan bowlers were. Mathews, who had earlier starred with the bat, chipped in with the ball as well, claiming a couple of scalps. It was the near-perfect team effort Sri Lanka were hoping for.