With New Zealand having sealed their World Cup 2019 final spot with an impressive triumph over India, Australia and England will now face off at Edgbaston to claim the other spot in the final.

With New Zealand having sealed their World Cup 2019 final spot with an impressive triumph over India, Australia and England will now face off at Edgbaston to claim the other spot in the final.

England goes into the match having registered impressive wins over India and New Zealand in their last two league matches. Australia, on the other hand, goes in having been stunned by South Africa in their inconsequential last game. However, the last time these two teams met Australia got the better of England by 64 runs. Set to chase 286, England folded up for 221. The Aussies would thus feel they hold a bit of an advantage.

Having seen the Kiwis outsmart India though, it is clear that the team which assesses the condition better on the day will get through. The one big change for England from the last time these two teams met is that Jason Roy has returned to the top of the order and has made a big difference. Also, Jonny Bairstow goes into the game with twin hundreds to his name. England would only hope that he doesn't meet with the same fate as Rohit Sharma. 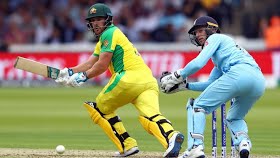 The Australian batting line-up is also as strong if not more. Aaron Finch has led from the front with the bat while David Warner also has been among the runs. Steve Smith completes the brilliant top three. Although Smith has not been as consistent as the openers, he will be expected to lift his game come the big day. The match will present a great opportunity for Peter Handscomb, who was originally left out of the squad, but now has been drafted straight into the semis owing injury issues

The great challenge for England in the semis will be for their batting to stand up against Australia's impressive bowling. Australia left-arm pacers Jason Behrendorff and Mitchell Starc ripped through England in the last game between the two sides with nine wickets between them. Pat Cummins to has made a mark during key moments in the tournament.

What gives Australia the significant advantage is the fact that the defending champions have never lost any of their previous World Cup semi-finals, this includes the pulsating tie against South Africa 20 years back. So will Australia maintain their unbeaten streak or will England make their first World Cup final appearance since 1992, at the home of cricket?