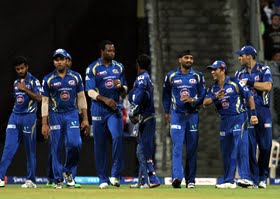 Tendulkar is Man of the Match: "If you look at the whole season., I've not been able to spend much time in the middle. But whatever I've batted, it's been pretty aggressive. There has been a bit of help for the seamers. I was striking the ball well today, and I thought therefore I should be more aggressive. It's about give and take - giving advice. It shouldn't be one way traffic about just me talking, it's about discussing cricket and sharing our thoughts. The passion for the game is very much there, whatever time I get on the field I try to make the most of it."

G Gambhir: "I don't know whether it's a jinx, but if you don't play proper cricket, this is what is going to happen. Every game is a new game, I see a lot of quality around our dressing room. We have four more games to go. We have a lot of depth in our batting, we'll put our best playing XI on the park."

RohitSharma: "Been going really well so far. I just don't want to relax. We've got four games to go, not taking it easy. Tendulkar is experienced enough, he got us the start we wanted. 170 on this ground, there wasn't much dew today."

Mumbai vs Kolkata would have ideally been hyped as a clash of the titans, but given the away record of Kolkata and the home record of Mumbai this season, the advantage is clearly with the hosts. Kolkata have lost all away games this year, while Mumbai have won all home games.

Mumbai have had an up and down tournament till now but at home, they have been unbeatable, winning 5 out of 5 at the Wankhede.

Kolkata are the defending champions but their performance this season has rarely matched that tag. They have been inconsistent and their performances has reflected in the points table; they are currently 7th in the table with 8 points (all of which came via home wins) from 11 games.