Refreshing to see Dravid, Ganguly in the commentary box

We often talk about cricketers and retirement. A number of players who hang up their gloves end up entering the commentary box, and then remain there for years. It is a lucrative career in itself, and the ex-players also get an opportunity to share the views on the game they love and have played with passion.

We often talk about cricketers and retirement. A number of players who hang up their gloves end up entering the commentary box, and then remain there for years. It is a lucrative career in itself, and the ex-players also get an opportunity to share the views on the game they love and have played with passion. Unlike during their playing days, there is no retirement age for commentators. They can go and on and on, and many of them have been doing so. However, with former India captains Rahul Dravid and Sourav Ganguly coming in, one wonders whether it is time for the old brigade to move out. 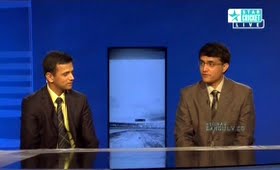 The likes of Ravi Shastri, Sunil Gavaskar, Arun Lal and Laxman Sivaramakrishnan have been around on the commentating scene for years, and have done a good job. But, with time their commentary has become highly monotonous. Shastri’s commentary has always been based on phrases, which he repeats time and again. It has been done so many times that his analysis has lost its gloss. As for the others, while their thoughts remain insightful, it is also true that they played cricket in a completely different era; one during which there were no talks of day night Test cricket, and also when there were no power plays in ODIs. T20s had not even entered into anyone’s realm.

Considering the abovementioned points, there are a few limitations in their observations when it comes to today’s matches since they belong to a totally different era. They aren’t very well versed with what’s going on within the dressing room of the modern Team India. In spite of all this, they have been doing a very commendable job over the years, enriching the viewers. But the arrival of Dravid and Ganguly though one feels the viewer needs a break from the old brigade so that the new, young faces can take over the commentary box.

The advantage with having Dravid and Ganguly in the commentary team is that they are fresh faces, having just finished their international career – Dravid retired only early this year while Ganguly hung up his boots in 2008. Both these men have captained India and have played all over the world. They also know a number of players presently playing cricket personally and, having played with them are aware of their weaknesses in and out.

Above all, both the former India skippers are very meticulous in their observations. It is not necessary for quality cricketers to be good commentators as well. However, Dravid and Ganguly are from the rare breed who excelled on the field and are very pleasing to listen to from the comfort of your homes. Paying heed to their thoughts, it is clear that they have gained a lot of knowledge about the game having played the sport for so long, and with success. Importantly, they are able to put across their point very articulately. Having Dravid and Ganguly in the commentary box is a pleasing sight. Hopefully, Anil Kumble and VVS Laxman would join the ranks in the near future.