Flashback: When England beat India at Wankhede in 2012

As India and England face each other in the fourth Test of the series at Wankhede Stadium, starting on Thursday, we look back at the Test when the two teams met at the same venue, during England's previous visit to India in 2012

As India and England face each other in the fourth Test of the series at Wankhede Stadium, starting on Thursday, we look back at the Test when the two teams met at the same venue, during England's previous visit to India in 2012. The Englishmen would seek confidence from the match, which they won by a comprehensive margin of 10 wickets.

Toss: India won the toss, and chose to bat

Having got a chance to make first use of the surface, India would ideally have wanted to post something in excess of 450. But, that wasn't to be the case as the hosts finished on a disappointing 327. The innings was built around Cheteshwar Pujara's 135 from 350 balls, a knock featuring 12 fours. But, there was not much in the form of support, except an impressive lower order resistance from Ravichandran Ashwin, who contributed 68. India had some big names in that line-up -- Gautam Gambhir, Virender Sehwag, Virat Kohli, Sachin Tendulkar, Yuvraj Singh and MS Dhoni. But they all failed.

For England, Monty Panesar claimed 5 for 129 while Graeme Swann finished wth figures of 4 for 70. England's response was highly impressive and, in a manner, set up things for the visitors. At the top, skipper Alastair Cook was difficult to dislodge again, as he made 122 from 270 balls. But, it was Kevin Pietersen's knock, amidst all the controversies surrounding him, that made the difference. In what was one of his finest knocks, KP smashed a typically aggressive 186 from 233 balls, an innings studded with 20 fours and 4 sixes as England replied with 413, and took the crucial lead. 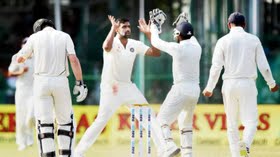 Pragyan Ojha was the most successful Indian bowler with 5 for 143 from 40 overs. Under pressure, and lacking confidence, India stumbled in the second innings. They were rolled over for an embarrassing 142 in 44.1 overs. Only two Indian batsmen reached double figures, so poor was India's effort. Gautam Gambhir made 65 from 142 balls while Ashwin was the next top scorer with 11. The Indian scoreboard read like a pin code. Numbers two to seven made 9, 6, 8, 7, 8, 6.

The spinners again made the Indians dance to their tune. Panesar picked up 6 for 81, and Swann 4 for 43. England were left to chase only 57 for victory. Nick Compton blasted a quick 30 and Cook made 18 as England won the Test by 10 wickets.