After England again came second best against an Indian wrist-spinner, the hosts skipper Eoin Morgan admitted that England have spin issues to deal with.

After England again came second best against an Indian wrist-spinner, the hosts skipper Eoin Morgan admitted that England have spin issues to deal with.

Kuldeep Yadav took 5 for 24 against England at Manchester after which KL Rahul ton took India to a breezy win. 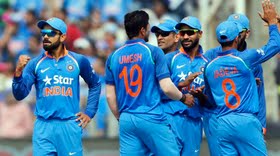 Praising Kuldeep, Morgan said in an Independent report, "He took three wickets in four balls, and deceived us. It wasn’t a case of us chipping it up in the air. He completely deceived us, and I thought he bowled well."

He went on to add, "We were probably about 30 or 40 short. Kuldeep bowled well, between now and the next game, we need to assess our plans, make sure they're the right ones, and stick with them."

On Root and Bairstow dismissals, Morgan stated, "The more time you spend at the crease, the better you see the ball. You go from sitting in the dugout to match pace, when a guy is three overs into his spell, it is going to be different. That's the hardest part about batting."