Having eased their way to victory in the first ODI at Sydney, Australia came up with an even more comprehensive effort to clinch the Chappell-Hadlee Trophy at Canberra. The Aussies had clearly gained some confidence from their triumph on Sunday

Having eased their way to victory in the first ODI at Sydney, Australia came up with an even more comprehensive effort to clinch the Chappell-Hadlee Trophy at Canberra. The Aussies had clearly gained some confidence from their triumph on Sunday, and it showed in the manner in which they bulldozed the hapless New Zealanders in the second one-dayer. The Aussie batsmen were all over the Kiwi bowlers from the very start, and it made the job of the bowlers a mere formality. They still came up with a sincere effort. As for the Kiwis, they were abysmal with the ball, and inefficient with the the bat.

Having won the toss, New Zealand skipper Kane Williamson decided to send Australia in, hoping to exploit the moist conditions. But, the move backfired in a big way as the Kiwi bowlers failed to get any purchase off the surface. New Zealand needed to get some early wickets to stay in the game. Instead, David Warner and Aaron Finch added 68 to set the Aussies on their way. Finch had fallen early in the previous game, and the New Zealanders were looking to target him as he seemed under some pressure. While they managed to keep him quiet, the Kiwis weren't able to dismiss him soon enough to gain some kind of an upper hand.

Finch's dismissal, in fact, proved to be a blessing in disguise. Warner was then joined by skipper Steven Smith, who carried on from where he left in the previous innings, when he had smashed a belligerent hundred. With Smith and Warner at the crease runs came quickly, as both are extremely capable of finding the boundaries frequently, and are also brilliant runners between the wickets. Their stand of 145 put Australia in command of the match. Warner got to his hundred without much trouble, which showed how little there was from New Zealand in the form of challenge. Smith missed out on a second consecutive hundred, but he should still be pleased with his effort. 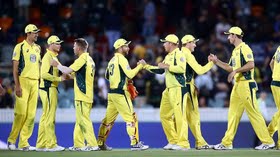 The Canberra ODI was also a demonstration of the x-factor that the Aussie batting line-up possesses even in the absence of Glenn Maxwell. Travis Head and Mitchell Marsh both swapped places and came up with brilliant half-centuries. Head came up with his second fifty in a row, and considering he contributes with the ball as well, he is a definite asset for the team. Marsh came up with a stunning effort with the bat. His blazing innings meant Australia finished with a target which was way above New Zealand's realm. Had they managed to exercise some control towards the end, they could have hoped for a resurrection. Instead, there was complete carnage.

New Zealand should be extremely disappointed with their bowling effort on the day. It wasn't as they were playing with an extremely novice bowling outfit. The duo of Trent Boult and Matt Henry went for 171 in their 20 overs, which was just too much. Colin de Grandhomme also went for 74 in his nine overs. In fact, if one leaves out Mitchell Santner and, to an extent, Tim Southee, they struggled. The only way New Zealand could have competed was if a couple of batsmen came up with big quick runs. Kane Williamson and Jimmy Neesham showed promise, but their efforts did not last long enough.