Finn, Broad help England to bowl out Pakistan for 222

Live News and Ball by Ball Score Updates of Pakistan Vs England, 3rd ODI at Dubai

Pakistan batting failed yet against the English pacers but a fighting partnership in the middle overs helped them set a decent target of 223 in the Third ODI at Dubai. Although the total might be below par, Pakistan would settle for it having been at a pathetic 97 for 5 at one stage.

This time round, Pakistan seemed to be getting off to a breezy start from its openers until the 4th over when Imran Farhat (9) was forced to edge a perfect outswinger from Steven Finn which was brilliantly caught by the diving Craig Kieswetter behind the stumps. Pakistan from 22 for 1 were soon 49 for 2 in the 9th over when no.3 Azhar Ali (5) edged his drive off Stuart Broad to the keeper. Mohammad Hafeez (29 from 28 balls with 3 fours) who looked good was next to depart in the very next over trapped infront of the stumps by a pacy inducker from Finn. 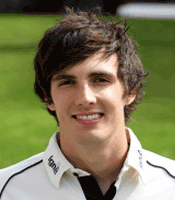 By the 11th over, Pakistan were in massive trouble at 50 for 4 when Skipper Misbah-ul-Haq edged his expansive drive off Stuart Broad to slip. Broad was getting the ball to move away with extra bounce despite holding the ball cross seam! England took a little while to find their next wicket after breaking a promising stand of 47 runs. Asad Shafiq (18) was the man to depart after getting run out in an attempted leg bye from squareleg in the 22nd over.

At 97 for 5, the unpredictable Shahid Afridi joined Umar Akmal and got the scoreboard moving with a few risky shots. Both the batsmen settled in to bring up their respective fifties but soon after that got out in succession leaving Pakistan back in trouble at 180 for 7 in 41 overs. First to go was Umar Akmal (50 from 93 balls with a four) whose early flick shot off Stuart Broad was caught one handed low to his right by Samit Patel at mid wicket. Shahid Afridi (51 from 55 balls with 3 fours and a six) threw his wicket getting bowled after playing a rash flick shot moving away from his stumps to James Anderson.

Towards the end, Umar Gul with a crucial run-a-ball 27 which included a couple of sixes helped Pakistan past the 200-run mark. For England, Steven Finn was once again brilliant with figures of 10-1-24-3. Stuart Broad also did a good job taking 3 for 42 in 10 overs besides bowling two maidens.

Toss and Teams : Pakistan have won the toss and elected to bat first in the 3rd ODI at the Dubai International Cricket Stadium. Trailing by 0-2, this is a must win match for Pakistan in this 4-ODI Series against England with the series at stake.

The England team has remained unchanged. Pakistan has received a big blow with the experienced Younis Khan unwell for this match. He has been replaced with Asad Shafiq. The other change is specialist Wicket Keeper Adnan Akmal coming in for Abdur Rehman.