Can Sehwag turn things around for India in Adelaide Test?

Match Preview of Australia Vs India, 4th Test for the Border-Gavaskar Trophy at Adelaide (January 24-28, 2012)

Almost a month ago there were plenty of expectations of a great contest coming up in the Border-Gavaskar Trophy! Star Cricket, the Broadcaster was giving lots of build ups to the series even calling it as the ‘Agneepath’ Series. Well now a month after the Boxing Day Test at MCG, what we have is the Border-Gavaskar Trophy surrendered to the Aussies by a stale looking Team India filled up with only paper tigers.

No Dhoni!: MS Dhoni, arguably one of the richest cricketer in the world is right when he said that he was the main culprit behind India’s disastrous performance with seven straight defeats overseas. Dhoni hasn’t done much himself to really keep a place in the Test team and it was only right that he is out of tomorrow’s Adelaide Test following a ban for slow over-rate. Ideally someone like Dinesh Karthik or Parthiv Patel should have been in the team as they possess better batting technique than MS Dhoni in the longer format of the game under testing conditions. However, the Selectors have Wriddhiman Saha who we will have to see if he can bat well for an international test keeper. Saha had an accidental debut at Nagpur in 2010 against a South African pace battery, infact picked at the last minute to replace an injured Rohit Sharma to play as a specialist batsman! Saha scored a duck but followed it up with a promising 36 in the second innings of the only Test of his life till tomorrow. The 27-year-old Saha’s first-class stats are pretty good which includes a century on Ranji Debut for Bengal. 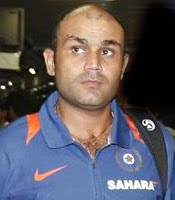 Sehwag takes over Captaincy: The captaincy will be taken over by Virender Sehwag for the Final Test at Adelaide which starts tomorrow. Sehwag has so far led India in three Tests in which he has tasted victories against Sri Lanka and Bangladesh while drawing a match against New Zealand. So far in the series, Virender Sehwag hasn’t got going and has scored just the one fifty. As a Captain, he will be expected to show more responsibility in his shot selection which has been very poor so far.

All eyes will be on the struggling Rahul Dravid and VVS Laxman on whether they can score big atleast in this final Test. Sachin Tendulkar has batted well barring the failure in the Perth Test and it will be his last opportunity to bat in a Test Match in this country. The pressure is off him to score a 100th international century in Australia given the fact that he can do it in the CB Tri-Series which also involves Sri Lanka.

As far as team changes are concerned, there will be one change atleast with Wriddhiman Saha replacing MS Dhoni. R Vinay Kumar most probably will make way for left-arm spinner Pragyan Ojha. Having said that, India could also go in for R Ashwin instead of Ojha, who could sit out only because the team needs atleast three quicks in the bowling.

The Australians have already announced their playing XI and the respite for the Indians is that Mitchell Starc would not play and instead it will be Nathan Lyon to bowl his lollipop off breaks. Almost all the batsmen have got the runs for the Aussies with the exception of Shaun Marsh and Wicket Keeper Brad Haddin who are due to come good in this series.

Pitch and Weather Report for the Adelaide Test: The pitch at the Adelaide Oval will be a lot batsmen friendly much to the relief of the Indians. The pitch should be on the slower and drier side in comparison of the other Australian pitches. The prevalent hot conditions in Adelaide could widen up the cracks and thus lead to some exciting uneven bounce and pace in the pitch as the game goes by. With this in mind, the Curator of the Adelaide Oval - Damien Hough could leave the pitch with some green grass to hold the pitch together for the five-day duration.

Live Ball by Ball Commentary and Scorecard of Australia Vs India, Fourth Vodafone Test at the Adelaide Oval can be followed on this site at : http://www.cricwaves.com/cricket/1264/australia-vs-india-4th-test-24-Jan-2012/Summary.html

(Match Preview of Australia Vs India, 4th Test for the Border-Gavaskar Trophy at Adelaide (January 24-28, 2012) by BV Swagath)