Former Indian opener Gautam Gambhir has expressed his disapproval of the ICC ranking system after the latest rankings released pushed India down to number three while Australia moved up to number one. New Zealand occupy the second rank in the updated rankings.

The cricketer-turned-politician cannot fathom how Australia have reached the top despite having a 'pathetic' record in the sub-continent even as India registered a series win in Australia, and won Tests in England and South Africa. 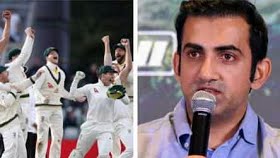 India's 42-month run at the top of the ICC Test rankings table ended after the updated rankings were released. According to Gambhir, India have been very good at home and have done reasonably well away, hence the rankings do not make sense.

"No, I am not surprised (India at No. 3). I don't believe in points and ranking system," he stated during the Cricket Connected show on Star Sports,, and went on to explain, "If you have to see from the overall impact point of view, India have lost series away from home but won against Australia. Hands down, they have been the most competitive side. They won a Test in South Africa, won a Test match in England. Not many countries have done that."

The 38-year-old reiterated that India should be the number one Test team according to him. "For me, India should be there (No. 1) because Australia. I have serious doubts On what front have you given Australia the No. 1 ranking? They have been absolutely pathetic away from home, especially in the sub-continent," he explained.

Gambhir did praise Board of Control for Cricket in India (BCCI) for reportedly agreeing to tour Australia if their players undergo a mandatory 14-day quarantine period in the wake of Coronavirus.

"Good on the BCCI. Fabulous. This is a very, very positive sign. They are probably looking at the bigger picture, it will change the mood of the country. Winning the series is a different thing, it's very important but it will probably change the mood of both the countries as well. Not only India but probably for Australia.

"When BCCI is there, they are probably the richest board they have got to be statesman as well. If India are to Australia, then I have a lot of respect for the BCCI," Gambhir went on to add.