India vs Australia: Rohit, Kohli sizzle as India down Aussies to clinch series

A dominant India got the better of Australia by seven wickets at the Chinnaswamy Stadium in Bengaluru to clinch the three-match series 2-1 after being hammered in the opening ODI at Mumbai by 10 wickets. Man of the match Rohit Sharma notched up his 29th one-day hundred while skipper Virat Kohli contributed 89 from 91 balls as India chased down 287 with ease.

During their respective knocks, Rohit completed 9,000 ODI runs while Kohli went past 5,000 runs as India’s one-day captain as the Aussie bowlers were rendered ineffective. Rohit and Kohli added 137 for the second wicket after KL Rahul was dismissed for 19. Rahul opened the batting after Shikhar Dhawan was unable to take his position at the top having hurt his shoulder while fielding. Shreyas Iyer also chipped in with an unbeaten 44 from 35 to take India home after Kohli's dismissal. 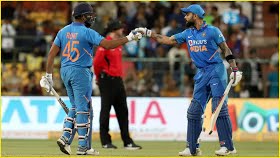 Earlier, Steve Smith hit a brilliant 131 from 132 balls as Australia posted a challenging 286 for 9. Australia got off to a poor start as Mohammed Shami had David Warner caught behind. Smith then was involved in a horrible mix-up with skipper Aaron Finch as the latter was run out for 19. Smith and Marnus Labuschagne again featured in an impressive third-wicket stand of 127 to bring the Aussie innings back on track. Ravindra Jadeja, however, dismissed Labuschagne and the promoted Mitchell Starc in quick succession to set Australia back. Shami (4 for 63) then ran through the lower order to restrict Australia to under 300.

Speaking after the win, man of the match Rohit stated that he wanted to play his shots, and take some risks. "It came off today, but if we had lost wickets, things would be different. Australia always comes up with good bowling attacks. Their top three quick bowlers challenge you, they've got variety and skills. In the first two games I was trying something different and it didn't come off. Today, I just wanted to be there till the end, around the 35th over, and I was trying to push the run-rate forward because I was seeing it really well, but it didn't come off because I miscued one."

On the importance of his partnership with skipper Kohli, Rohit added, "Once KL got out, we knew we needed to stitch together a big partnership, and no better person than the captain himself to do that. It was important to get that partnership from the team's perspective. We had that talk in the middle - one of the two of us needs to continue, and we couldn't lose the momentum, especially after the 100-run stand. To keep that Australian batting line-up to less than 290 was impressive."

Indian skipper Kohli, who was the man of the series, stressed on the importance of experience. "We're quite experienced, Rohit and I, and we were short of Shikhar's experience. We got a good start. We expect openers of the quality of Rohit and KL to give us starts like that. When KL got out it was a tricky situation. The ball was gripping and turning a bit, and this is where experience comes in," Kohli explained.