Plenty of gains for India from practice game, few for Lanka

A lot cannot be expected to be achieved from a one-day practice game. However, India would be pleased to have achieved more than what they expected. While their batsmen had a field day, thrashing the mediocre

A lot cannot be expected to be achieved from a one-day practice game. However, India would be pleased to have achieved more than what they expected. While their batsmen had a field day, thrashing the mediocre Sri Lankan bowling attack all over the ground, the bowlers did just well enough not to be overawed by the strong batting line-up. As for the Lankans, they fared miserable in the field. And, only a couple of their batsmen really got their eye in. Lanka, however, would like to believe that they got some much-needed practice before the series.

Two Indian batsmen seized the opportunity with sparkling tons. Speaking of the first centurion Rohit Sharma, this is an extremely significant knock in the context of his career. He hasn't any kind of cricket ever since he injured his finger during the first match of the one-day series in England. He wasn't even chosen for the West Indies series, or the first three ODIs against Sri Lanka. With this ton, Sharma has made a strong case for a comeback. Crucially, he not only looked in good touch, close to his fluent best, but also spent a lot of time at the crease. The longevity of the innings meant that he has given a good account of himself in the fitness department. 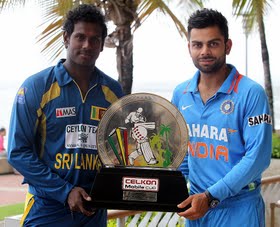 Manish Pandey is the other batsman who made excellent use of the opportunity. He has been on the fringes of selection for a while now, and celebrated his maiden call-up to the Indian team with a high-quality hundred. There have been some questions raised about Pandey's temperament since he has a habit of giving his wicket away after getting starts in the IPL. However, against the Lankans, he came up with a mature performance. Unmukt Chand also got a quick fifty to remind selectors that he is still around. He needs to work on playing the long innings though.

In the bowling department, spinner Karn Sharma was the standout bowler. There have been high hopes from Sharma ever since he announced himself on the T20 scene. And, the fact that he has tasted success against the Lankans, who are considered to be excellent players of spin, will give him plenty of confidence for the future games. The other bowlers weren't as effective, so that will be a cause of worry for India. Then again, bowling hasn't been India's strength for a while now. Thus, their below par performance shouldn't come as a big surprise. Of course, they would be pleased if the situation can improve with the World Cup approaching.

Sri Lanka basically played this game to get some good match practice. In that sense, they succeeded. However, they would still have hoped for better results. Their bowling was completely abysmal, in spite of featuring a number of experienced bowlers. In the batting department, only Upul Tharanga crossed fifty. Kumar Sangakkara and Mahela Jayawardene both got 30s, but the rest couldn't do much. India, undoubtedly, walked away with more gains in the end.