Mushfiqur Rahim is the Man of the Match for his maiden 200 off 321 balls.

1613 runs were scored in 436 overs for loss of 19 wkts in Galle Test- second highest run-producing Test in the subcontinent.

Five centuries were scored for SL in this Test, equaling world record. Australia, Pakistan & Eng are other team to hit 5 ton in a Test.

Eight 100s scored in the Galle Test, equaling the world record. Had happened only once before - WI vs SA Test at St.John's in 2005.

Maiden Test 100 for Nasir Hossain - this is the first time three Bangladesh batsman hits centuries in a same Test innings.

Mushfiqur Rahim is only the 2nd visiting captain after Stephen Fleming (274* Colombo, PSS 2003) to hit a double-century in Sri Lanka.

Mohammad Ashraful celebrates his Test comeback with a century. His fifth against Sri Lanka.

Kumar Sangakkar reaches to his 31st Test century - jointly the most (with Mahela Jayawardene) for Sri Lanka in Tests.

Kumar Sangakkara (1018) is the first batsman to score 1000 Test runs against Bangladesh.

Kumar Sangakkara has moved into No 10 position in the list of highest run scorers in Tests.

Sangakkara gets to his 42nd Test fifty in his career.

Sri Lanka and Bangladesh have played 12 Test, SL won all, 7 of those by innings margin. 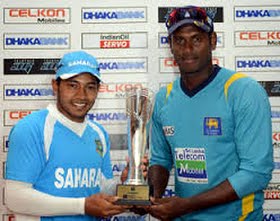 Vithanage to debut for Sri Lanka. Tamim Iqbal misses out for Bangladesh due to his wrist injury.

Thilan Samaraweera continues to be out of the SL Test team. Jayawardene is out injured. All other top players picked.