Johannesburg Test: The many twists and turns

Over the last decade, many pundits have been worried about the future of the five-day game; some have even suggested playing Tests in the night to revive interest in the format.

Over the last decade, many pundits have been worried about the future of the five-day game; some have even suggested playing Tests in the night to revive interest in the format. But, every now and then comes a Test which compels one to believe that the five-day game is very much alive. The first Test between India and South Africa which ended at Johannesburg on Sunday definitely falls in that category. There was hardly a dull moment during the Test. Here’s a recap of the see-saw battle that took place at the Wanderers. 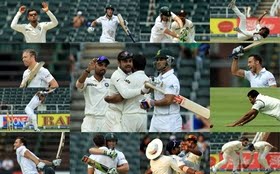 Day 1:Early wickets for SA, India fight back. India won the toss and took the bold decision to bat first. When the South African pacers dismissed the Indian openers cheaply, it seemed that India would once again collapse away from home and hand the Test on a platter. But, Virat Kohli demonstrated that he had the ability to perform in Tests as well. His century in his very first innings on South African soil, and his partnership with Cheteshwar Pujara, saw India end day one on a decent 255 for 5. The visitors seemed set to put up a fighting first-innings total on the board.

Day 2: India collapse, but bowlers hit back. India failed to build on their good work done on day one. The last five wickets fell for the addition of just 25 runs. Overnight batsmen Dhoni and Ajinkya Rahane were dismissed early, and Vernon Philander ran through the tail without much trouble. South African skipper Graeme Smith hit a chancy half- century as the hosts put themselves in a great position to reach 130/1. The Indian bowlers then brought them right back in the match. South Africa lost Amla, Kallis and Smith all at the score of 130. JP Duminy and AB de Villiers also fell early as India reduced the hosts to 146 for 6. A steady partnership between Philander and du Plessis took them to the end of play without further damage.

Day 3: An Indian domination. With the game evenly poised India took the lead again, first dismissing South Africa for 244, and then batting exceptionally well in their second innings. Murali Vijay (39) and Pujara added a crucial 70 for the second wicket to see off the new ball. The day was essentially about the partnership between Pujara and Kohli. They showed patience and aggression in desired measure to take India to a strong 284 /2, Pujara registering his first ton away from home.

Day 4: SA show resolve. India were in a great position but South Africa still showed some gumption as they reduced India from 315 for 2 to 421 all out. They still had the envious task of chasing down 458, but thanks to Alviro Petersen’s unbeaten 76 they were in with a chance of save the Test.

Day 5: Faf, AB show. The final day was all about the partnership between du Plessis and de Villiers. After losing Petersen for 76 and Kallis for 34, the pair batted incredibly well to put South Africa in hunt for the record chase. de Villiers fell for 103, but South Africa had cross 400 by then. It was du Plessis’ run out (by Rahane) at with the score at 442 for 7 that prevented South Africa from chasing history, and the great Test match was drawn.