One could sense it coming -- no, not because of the whole unwanted Kevin Pietersen saga, but because of the lack of enjoyment that had crept into Andrew Strauss’ game. Over the last year and a half, the England skipper was constantly under pressure to justify his place in the Test team not only as a skipper, but as an opener as well. It was evident that Strauss was struggling, and at 35, age wasn’t on his side. Following his twin hundreds against West Indies at home, there were brief hopes of a revival. But, even the eternal optimist knew deep down in his heart that Strauss’ hundreds against the Windies didn’t count for him. 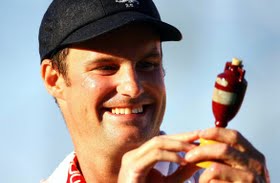 Before the West Indies series, and after it, against South Africa, the England captain did nothing to justify his place in the XI. The fact that he was still part of the side was largely due to the fact that he remained the best choice the team had as a leader, and his cause was helped by the fact that the side was performing brilliantly overall. It is indeed one of the ironies of cricket that when a team does well, every poor performance by the leader is masked under the guise of him being a great leader, but when the same team begins faltering, he becomes the first fall guy.

The case with Strauss was no different. Under him, England won two Ashes series, and even whitewashed the Indians 4-0 at home last season, a triumph that gave England the number one ranking in Test. Around the same time last year, Strauss was being hailed as one of the countries all-time great captains. The fact that he had failed with the bat in the series was conveniently ignored. However, the humiliation meted out by Pakistan in the UAE put the pressure back on Strauss. He wasn’t among the runs again, and the knives were back on him.

Strauss’ failures against South Africa weren’t surprisingly, but only put things into perspective for the struggling England captain. His dismissal in the final Test, shouldering arms and losing his wicket, was demonstrative of Strauss’ muddled mindset and his weakened skills. If nothing else, that was a clear indication that the left-hander’s time in international cricket was up. Applause to Strauss for walking away in a dignified manner, admitting that he wasn’t good enough any longer.

In spite of a disappointing end to a career that kick-started in an unbelievable fashion, the man can walk away with his head held high, for he did a lot of good to English cricket, especially as a leader. Following the Moores-Pietersen fiasco, it was Strauss who held the team together and got them back on track in the company of Andy Flower. To be fair to the England skipper, he wasn’t a great leader, but an efficient one. He led his team in an admirable manner, but the England media got carried away with their country’s amazing show at home, and anointed him as a ‘legend’.

History wouldn’t count Strauss among England’s best players or captains. But the stoutly-built left-hander has done enough to be remembered as a cricketer who made the game richer through his batsmanship, dedication towards the game, and an ability to deliver above potential.