England have leveled the Test Series against India 1-1 with a clinical 10-wicket victory well inside Lunch on the fourth day of the Mumbai Test. It took England a little over an hour to wrap up the match as India surrendered its last three wickets meekly to leave a target of just 57.

England have leveled the Test Series against India 1-1 with a clinical 10-wicket victory well inside Lunch on the fourth day of the Mumbai Test. It took England a little over an hour to wrap up the match as India surrendered its last three wickets meekly to leave a target of just 57. Opener Nick Comtpon showed some hidden aggression in his game by smashing an unbeaten 30 (from 28 balls) with 4 fours and a six while Skipper Cook was content with 18* (from 30 balls) as England got to the target in just 9.4 overs. 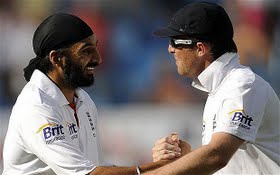 India lost Harbhajan Singh inside 10 minutes of the start of play on Day 4. Harbhajan launched the first ball of the day from Monty Panesar for a boundary over mid off to show India’s intentions. However, in the next over, Harbhajan went back for a cut off Swann but was forced to glove the jumping off break to slip. Zaheer Khan was dismissed by Monty in an attempted slog sweep against the turn which only resulted in a high top edge. Last to be dismissed was Gautam Gambhir who played very selfishly as he didn’t care to farm the strike and was happy to expose the tail enders.

It was a fitting end that Gambhir was out although he was given out lbw off an inside edge in a forward defence to a drifter from Swann. Gambhir added only 12 runs to his overnight score of 53 while facing 33 balls this morning by defending and nudging the ball only. Monty Panesar finished with mean figures of 6 for 81 in 22 overs while Swann complemented him with 4 for 43. The Man of the Match award was given to Kevin Pietersen for taking the game away from India with his 186.

The third Test of the Series will be played at Kolkata starting from the 5th of next month.

Fabulous performance from England to level the series. India has a lot of revamp to do before the Third Test.

MS Dhoni says that Monty Panesar with the pace he bowled made it difficult for the Indian batsmen. To some extent he says that the Indian spinners were disappointing. He says that 200 in the second innings would have been a good score to defend. Five more days and the two teams meet again for the Third Test at Kolkata.
Alastair Cook is a proud man leading England from the front with another superb century. This match, Pietersen played to his potential and took the game away from India. Fantastic and great to watch is what Cook says on KP's batting. Brilliant performance says Cook on Monty and others. Cook thanked the English fans who showed tremendous support by coming here all the way.
The Man of the Match is Kevin Pietersen for his destructive knock of 186. He gets a prize money of Rs. 1 lakh. KP says that this knock of 186 is the best of his career now that England have won the Test. On Cook, he says that the left-hander will break all the England records! KP thanks the team management and his colleagues for soothing out all the issues he has been facing prior to this series. KP says that he has decided to trust his defence in this Test match and not to play sweep shots early on.

Build Up to Day 4: This is undoubtedly going to be the last day of the Second Test Match. Following a disastrous collapse from India yesterday evening, the writing is on the wall of an English victory. They just need to take the remaining three wickets in hand and chase down a few runs. As of now, India have got an overall lead of 31 runs and have got Gambhir and Harbhajan at the crease. Only a miracle can save India from this losing situation.