When a Test match ends in four days in spite of the fact that wet weather has caused significant interruptions in the game, you can wonder the kind of domination the victorious side has had against their opponents.

When a Test match ends in four days in spite of the fact that wet weather has caused significant interruptions in the game, you can wonder the kind of domination the victorious side has had against their opponents. This was the case in the first Test between India and New Zealand, which was played at Hyderabad. The result of the match wasn’t surprising since India were the overwhelming favourites even before the series began. It was just the manner of New Zealand’s batting collapse that was disappointing. Even with the thin resources, they could have put up a better showing.

Most New Zealand teams of the past, or for that matter most visiting sides, have struggled against spinners in India. However, earlier Kiwi sides at least showed the pluck to hang around and fight it out. This present bunch doesn’t seem to possess that quality. Actually, to be fair to Ross Taylor’s men, it is a bitter truth that aren’t talented enough to tackle the tough Indian conditions, and one of the key reasons behind that is their inexperience. This was also one of the major factors that led to their downfall in the Caribbean. 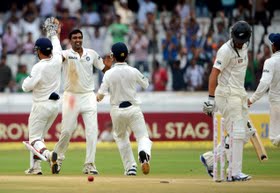 In spite of all the elements conspiring against them, it still cannot be denied that New Zealand could have put up a better effort, at least with the bat. The dogged partnership between Brendon McCullum and Kane Williamson in the second innings was demonstration of the fact that, if batsmen have the right mindset, they can stay on the wicket for a longer duration. Both the abovementioned batsmen got starts in both the innings, but failed to convert them into bigger scores. Although Williamson got a deserved half-century, it wasn’t of much consequence in the context of the match.

Williamson can still be granted some leeway considering he is still very much raw on the international scene. But the worrisome aspect for the future of New Zealand cricket that emerged from Hyderabad was the fact that apart from McCullum, Williamson and James Franklin, no Kiwi batsman looked comfortable at the crease. Martin Guptill, who is counted among New Zealand’s experienced batsmen now, was all that sea, and even the skipper Taylor seemed clueless. His second innings dismissal, shouldering arms only to be clean bowled by R. Ashwin, epitomised the shabby state of New Zealand cricket at the moment.

For New Zealand to tide over the tough times, they need their experienced players to stand up. Instead, the likes of McCullum, Guptill and even skipper Taylor, for that matter, are finding it difficult to deal with the pressure of carrying the team on their shoulders. How then can the Kiwi management expect the young in the side to fire? Unless this present scenario changes, it is hard to see New Zealand rising from their slump in the near future.