This is of course following the ugly incident at a bar involving the left-arm spinner. A drunk Panesar was fined and arrested for urinating on a bouncer on the 5th of this month at a night club. It is learnt that Monty has been going through a turbulent time in his life after splitting with his wife. It wasn’t long ago when Monty had spun England to a rare Test-Series win in India. 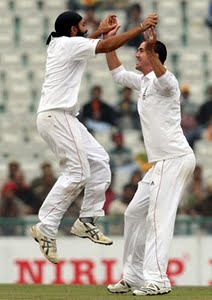 Monty Panesar has also lost his place in the England team following the ugly bar episode. The 31-year-old has been replaced by Lancashire left-arm-spinner Simon Kerrigan who is yet to make his international debut. Monty meanwhile has been signed up by Essex for the remainder of this season.

Following are the statements released by Monty Panesar and Sussex:

“I am grateful to Sussex for allowing me to be released from my contract for 2014 and 2015 in order to explore other opportunities to further develop my cricket. I want to give myself the best chance of playing all forms of the game at the highest level.

I would like to thank Sussex for the opportunities, experiences and support I have enjoyed at the club since 2010, and my gratitude for the contribution Sussex have made in providing me with a platform to gain selection for England on three successive winter tours.

I have endured a challenging time this year off the field and my frustrations have sometimes got the better of me professionally. I apologise for letting the club, my colleagues and my fans down.

I have re-engaged with Neil Burns at London County Mentoring, to help to develop my cricket further and I feel that Neil, along with a trusted support structure in place around me will help me put my personal and professional problems behind me and enable me to put all my energies and focus into the game and a new club.

I am determined to do whatever it takes to gain selection for England this winter. I want to become the best I can be.

I believe that if I maintain the bowling progress I have made in recent weeks which enabled me to be selected for the Test squad at Old Trafford, I can fulfill my long-held ambition of becoming the best spin bowler in the world, over time.”

“Sussex County Cricket Club can confirm that Monty Panesar will be allowed to leave the Club at the end of the 2013 season.

The Club’s investigation into the recent incident which took place on Monday 5th August has been concluded, and both parties have reached agreement. He will become a free agent as of Friday 27th September 2013.

Additionally, Sussex has agreed to Monty’s request that he be allowed to play on loan for a club in Division Two of the LV=County Championship until the end of this season.

Zac Toumazi, Chief Executive of Sussex Cricket, said “Clearly this season has been a very difficult time for Monty Panesar. Having reviewed the whole situation the Club has agreed that Monty be released from his contract. This will give him every opportunity to put his personal and professional life back on track.”

Sussex’s Professional Cricket Manager Mark Robinson said, “Monty has been an integral part of the professional cricket team and has been a valuable contributor to the overall performance of the club during his time at Sussex. He is an outstanding bowler. I would like to thank Monty for his contribution and wish him well for the future.”