Tall middle-order batsman Chamara Kapugedara has been given an SOS call to join the Sri Lankan team in Australia for the best of three finals of the Commonwealth Bank Series. Sri Lanka are in a spot of bother with all its three match-winning all-rounders – Farveez Maharoof, Angelo Mathews and Thisara Perera picking up injuries.

Yesterday’s last league match against the Aussies at the MCG saw Thisara Perera breaking mid way in his over after pulling up a side strain. Angelo Mathews in the same match suffered from a calf muscle strain. 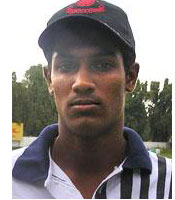 Earlier in the Hobart match against India, Farveez Maharoof had strained his back. Sri Lanka are going to send one of these players home with Chamara Kapugedera flying in to Australia as cover. It’s learnt that Thisara Perera is most likely to be the man flying back to Sri Lanka to recover on time for the upcoming Asia Cup.

The best of the three finals begin from tomorrow with the first match at Brisbane.