There were nerves getting back into the camp: Warner after match-winning knock against Afghanistan

David Warner marked his return to an Australian cricket team with a typical unbeaten 89 against Afghanistan on Saturday at Bristol as the defending champions started their campaign with an impressive seven-wicket victory.

Warner hit an unbeaten 89 off 114 balls as the Aussies chased down 208 with ease. Skipper Aaron Finch also contributed with 66 off 49 balls. Warner, returning from the one-year ball-tampering ban, was booed by the crowd on expected lines.

The Aussie opener, however, seemed prepared for it and did not pay much heed to it. He smashed eight boundaries in his knock to shut out Afghanistan's challenge. 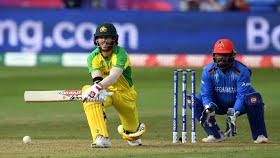 "For us, it's getting past this first victory and move on to the West Indies. We know the bowlers always say that one-day cricket is a batsman's game, but you saw the out and out quicks going through the batsmen," he added.

"For us as batters, it's about holding our nerve. This team is a different one from the team back then but there are great energy and a great buzz about this team," Warner further went on to say.

Earlier, Australian bowlers did very well to set up the victory for the team. Pat Cummins and Adam Zampa claimed three wickets and Marcus Stoinis two as Australia bowled out Afghanistan for 207.

"Always a bit of nerve, we've been training together so long now. We were probably ready to go four days ago, long build up. But good to get the first win. Wickets in the Powerplay are crucial to any side, if you look at the data, so pretty good to get a couple early. A couple of sharp run-out chances from Smithy," captain Aaron Finch said at the post-match presentation.

"I felt good today, you get a couple away early and get a good flow going. Warner is very important to our side. He was struggling to time the ball in the first half, but the fact that he kept hanging in there was great for him. He did the job at the end. Important you don't look too far ahead," Finch added.