Kolkata Knight Riders 169/3 (Uthappa 80, Russell 59) beat Chennai Super Kings 165/9 (Hogg 4-29, Russell 2-20) by 7 wickets The fourth wicket partnership of 112 between Robin Uthappa and Andre Russell helped Kolkata Knight Riders to take revenge against Chennai Super Kings at Eden Garden, Kolkata. Unbeated 80 from Robin Uthappa saw KKR winning the game by 7 wickets. Uthappa continued his inning from where he left in the last game. He made sure that he would carry his team home today. 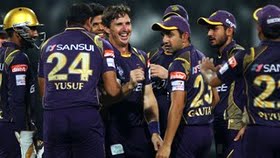 Chasing score of 166 runs, their openers started well. Gautam Gambhir hit two sixes before getting out on 19 off Mohit Sharma in the fifth over. Manish Pandey found it difficult to find his feet in the middle and looked very sluggish. Ultimately he thrown his wicket off Neggi trying to hit him over mid-wicket but just couldn’t clear Jadeja there. Soon after that, Surya Kumar Yadav also got out and put KKR in immense pressure. KKR team management changed the batting order and sent Andre Russell above Yusuf and Deoschote. It turned out to be a master move and he slammed CSK with his some fearless stroke play. Russell kept the required rate in his reach and never allowed any bowlers to get settle in from there on. He attacked Jadeja and his country mate Bravo which turned the momentum towards KKR.

Without Ashwin, CSK bowling was not looking at the mark and they seemed to struggle through most past of the inning. Even the purple cap holder Ashish Nehra(4-0-36-0) couldn’t help their cause. Earlier Kolkata Knight Riders skipper Gautam Gambhir won the toss and elected to bowl first. It was a perfect start for the KKR as they struck the first blow on the very first ball of the inning when in form Smith was caught in the covers by Ryan Ten Deoschate off Pat Cummins. In spite of taking wicket of the first delivery, Cummins conceded 19 runs of the first over as Brendon McCullum(32) slaughtered two big blows for maximum.

CSK batsmen were looking for counter attack despite of losing wickets at regular intervals. Suresh Raina also got perished away trying to play the ball over the mid-on but he wasn’t successful doing that and caught by Piyush Chawla. CSK lost the wickets of McCullum, Du Plessis and Dhoni in very short span of 11 balls and 8 runs. At one point, they were reduced to 72-5 in the seventh over. Bravo and Jadeja somehow managed to add half-century stand but couldn’t able to accelerate the run rate. Late cameo from Pawan Neggi helped CSK reach 165. 44 years-old Brad Hogg was the stand out performer with the ball for the Kolkata Knight Riders. He took the important wicket of McCullum and Du Plessis in his first over and retarded the scoring. He again grasp Jadeja and Neggi in his last over. With win against CSK, KKR moved on the third spot whereas CSK is still retaining their top spot on the points table.Player of the Match: Andre Russell Maximum sixes award: Andre Russell