India would definitely be smarting from the defeat they tasted at Galle at the hands of Sri Lanka in spite of dominating a major portion of the match. Not a lot went wrong for India during the first three days

India would definitely be smarting from the defeat they tasted at Galle at the hands of Sri Lanka in spite of dominating a major portion of the match. Not a lot went wrong for India during the first three days, but if they break down the results there would be a number of factors that they would realise went awry. The most glaring was obviously their complacency or incompetence in allowing Sri Lanka to recover from a position where defeat seemed very much on the cards. Second obviously was their ineffectiveness of tackling the Sri Lankan spinners, Rangana Herath in particular. These two factors combined in India's downfall, and undid all the great work they had done earlier. 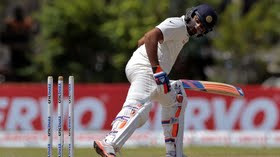 There were some big individual disappointments as well. Rohit Sharma was the biggest of them all. He was under the spotlight as Virat Kohli had marked him out as the man to take the mantle at number three. The signs weren't positive going into Galle. Rohit had failed in both innings batting at the top of the order. There were no major improvements. In fact, things only got worse as he fell playing unimpressive shots. His second-innings dismissal was particularly embarrassing as played outside the line to a delivery spinning away from him, and was clean bowled. The twin failures forced Virat Kohli to admit that Rohit wasn't delivering.

The other major disappointment was the lack of bite displayed by veteran off-spinner Harbhajan Singh. He bowled reasonably against the weaker teams to retain his place for the Sri Lanka series. His ineffectiveness though was clearly exposed against Lanka. The whole idea behind playing three spinners at Galle was for the Indians to exploit the conditions on offer. But, in spite of playing five bowlers, they were clearly one spinner short, as Harbhajan was reduced to being a stop-gap arrangement. This was because he never troubled any batsman during the two innings, and was only brought on to give the others a break.

India's pace bowling too stood exposed as Sri Lanka went on the attack. With Dinesh Chandimal and Lahiru Thirimanne going all guns blazing, the Indians needed their fast bowlers to exercise some sort of control. Instead, Varun Aaron, who bowled a spectacular delivery to begin day three, was rendered ineffective in the face of an amazing counter-attack. Ishant Sharma was only slightly better, but for a player of his experience, he once again disappointed. The five-bowler theory wasn't a bad move. In fact, it worked well for most portion of the match. However, when India were put under pressure everyone, including Ravichandran Ashwin and Amit Mishra, who were menacing until then, struggled.

Apart from not being able to maintain the pressure, there was another big failure for India at Galle -- their stumble against spin. This was not the first time India had been preyed upon by slow bowlers. In recent years, Monty Panesar, Graeme Swann, Moeen Ali and Nathan Lyon all have come up with match-winning performances against India. This is a really worrying sign for the visitors as most of these defeats have been huge embarrassments, with the team failing to put up any kind of resistance. Looking at their record in recent times, one wonders whether they can still be called 'good players of spin'.