Before the hat-trick ball, Kuldeep asked Dhoni what to bowl, "I asked Mahi bhai, what should I bowl. He said 'tujhe jaisa bhi lagta hai, woh daal (bowl the way you want to)'. I was very happy that he backed me," Yadav was quoted as saying in an IANS report. 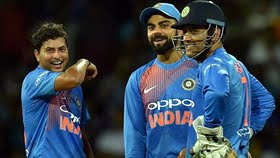 Kuldeep, who also thanked skipper Virat Kohli for supporting him, and added, "This is very special for me. That really changed the game for us. It was a proud moment."

The spinner also admitted that he was struggling in the earlier overs. "The first five overs I was struggling to bowl in a particular area, but later on I got the spot, and the rest is history,” he said.