A practice game by any visiting side is seen as an opportunity by that team to spend as much time as possible out in the middle. And if that is the criteria, South Africa should be pretty pleased with their performance in spite of the fact that Australia A had better returns of the two...

A practice game by any visiting side is seen as an opportunity by that team to spend as much time as possible out in the middle. And if that is the criteria, South Africa should be pretty pleased with their performance in spite of the fact that Australia A had better returns of the two, statistically speaking. In Australia A’s first innings, the Proteas bowlers were in the field for as many as 135 overs, something which will stand them in good stead as they will be expected to bowl as many overs in an innings on an average in the Tests. 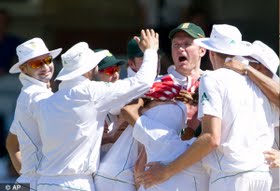 In the bowling, the biggest plus was definitely the performance of Dale Steyn. Even though Steyn is anyways expected to be South Africa’s chief performer with the ball during the Tests, the Proteas would still have been pleased to see him fire on all cylinders. If his figures of 3 for 54 in the first innings were standout, he was extremely fiery during his short five-over spell in the second innings. Steyn ran in and bowled as quickly as he good, an indication of what is in store for Michael Clarke’s men.

The other bowlers weren’t as successful, which would worry the visiting side to an extent. Even though Vernon Philander was efficient, he failed to pick up any wickets while Imran Tahir’s two-for cost him over 150 runs. Although the spinners won’t be expected to play a major role in Australia, Tahir would still have to do a job, that of holding one end up and striking at key moments. In that sense, Tahir needs to improve significantly on his performance against Australia A. Meanwhile, the performance of little known Rory Kleinveldt would have impressed the South African management for sure.

There were better gains for South Africa in the batting department, as almost everyone got a decent hit out in the middle. Skipper Graeme Smith made a stroke-filled half-century, and even though his opener partner Alviro Petersen fell after getting a good start, he spent enough time at the crease to get a hang of the conditions. As always, Hashim Amla was dour. He stuck around for a well-compiled half-century before retiring. The trio of J P Duminy, A B de Villiers and Jacques Rudolph all got starts, and although they didn’t look comfortable at the start, they stuck around to their credit, and got some crucial match practice. Even Faf du Plessis played an impressive cameo.

The performances won’t count for much when South Africa take on the Australians in the Tests. However, their positive efforts in this game will give them the desired confidence as they look to reiterate their number one status as opposed to if they had a poor practice out. Australia would come hard at South Africa, and the Proteas must be battle-ready.