Australia defeated England in the second ODI by 64 runs at Lords, London to take 2-0 up in the five match series.

Australia defeated England in the second ODI by 64 runs at Lords, London to take 2-0 up in the five match series. Batting first Australia put up a massive score of 309 in rain curtailed match of 49 over. In reply, England could only manage to score 245 runs which handed visitors an easy win of 64 runs.

Chasing a score of 310 runs, England started off well as both Jason Roy and Alex Hales were hitting boundaries in quick succession. They took the attack from the Aussies and attacked on the new ball bowlers. Nathan Coulter-Nile provided the first break through for the visitor’s when Hales was caught by Smith for 18. James Taylor came and looked to get settle in but Australian were picking wickets at regular interval. Jason Roy was caught behind by Wade off Cummins for 31 and home team was reduced to 68 for 2 in the 12th over. James Taylor added 51 runs with skipper Eoin Morgan for the third wicket. This wicket opened up the gate for the visitor’s and they kept chipping in with wickets after that and none of the English batsmen were able to support Morgan. Morgan played a lone hand when his team mates were coming and going. Morgan was the last man to be dismissed for 85 runs where he hammered four fours and four sixes. 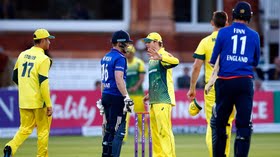 Pat Cummins was the pick of the bowler for Australia with four wickets. Glenn Maxwell also took two wickets where as Starc, Coulter-Nile and Mitchell Marsh had one scalp each.

Earlier in the day, England won the toss and elected to field first. The start for Australia was not a great one as David Warner was retired hurt after just facing one delivery. This was a big blow for Australia as Warner was in form batsman for them. Steven Smith came in at No. 3 to join Joe Burn and he played a responsible captain’s inning. Joe Burn was in form batsman on Australia A tour of India but he didn’t get any significant run in this series. Joe Burn was bowled by Finn for 22 runs off 26 deliveries. George Bailey and Steve Smith put 99 runs partnership for the second wicket and both batsmen completed their respective half centuries. Most of the Australian batsmen get good and timely run and helped the team to post a respectable total. Glenn Maxwell and Shane Watson also played good hands and contributed with the bat in the middle over. Mitchell Marsh was main aggressor in the visitor’s inning as he hit seven boundaries and three sixes in his 31 balls 64-runs inning. His blistering inning ensured that his team will reach a score in excess of 300.

Now, England will have to win all the remaining matches to be alive in the tournament and they can’t even afford to make a single mistake. On the other hand Australia would like to win the third One day and win the series there.

Man of the Match: Mitchell Marsh