Looking at him as the future: Virat Kohli on Rishabh Pant

Under fire after two poor outings in the first two T20s against West Indies, Rishabh Pant made his bat do the talking as he smashed an unbeaten 65 from 42

Under fire after two poor outings in the first two T20s against West Indies, Rishabh Pant made his bat do the talking as he smashed an unbeaten 65 from 42 balls to help India to victory by seven wickets in the company of skipper Virat Kohli, in the third T20.Chasing 147, India got home with ease thanks to a century stand between Kohli and Pant after the openers fell cheaply. This was after Deepak Chahar's sensational spell of 3 wickets for 4 runs made West Indies sweat. It needed a sedate half-century from the experienced Kieron Pollard to give them a decent total to defend. 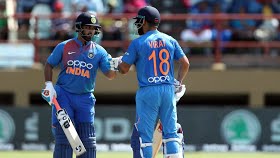 After the 3-0 clean sweep, Kohli sang praises of Pant, earmarking him as one for the future. “We are looking at him as the future. He has got a lot of skill and lot of talent. It is about giving him some space and not putting too much of pressure,” the captain said after the game.Kohli is confident that with experience Pant will grow in consistency as well. “He’s come a long way since he’s started. It’s about winning and finishing games like these. In international cricket, you need to tackle pressure differently. If he plays like this regularly, we will see his potential shine for India,” Kohli added.The skipper was also elated with pacer Deepak Chahar's super effort of 3 for 4, and termed him as a similar bowler to Bhuvneshwar Kumar. “Deepak is similar to Bhuvi. With the new ball, Deepak’s skill is up there with Bhuvi. Bhuvi however has more experience at th death. Swing has been his USP in the IPL too. He is really lethal with the new ball," Kohli added.On the overall performance of the team in the 3-0 sweep, Kohli stated that it was a clinical performance. "We wanted to try out players but priority was to win games. Deepak was great, Bhuvi professional as always. The wicket over here was much better than the one in Miami. West Indies got to a decent total because of the wicket, but we were professional with both ball and bat,” the skipper further said.