Ashes 2015: A Lord's effort that should embarrass England

Consider this. On a day one pitch, Australia lost just one wicket, and two batsmen eased to their centuries. At the end of the day's play, the pitch at Lord's was heavily criticised, described by many cricket pundits as among those that kills interest in Test cricket.

Consider this. On a day one pitch, Australia lost just one wicket, and two batsmen eased to their centuries. At the end of the day's play, the pitch at Lord's was heavily criticised, described by many cricket pundits as among those that kills interest in Test cricket. By end of day two though, the Australian bowlers have England in all sorts of trouble, leaving them four down. And, with a few overs still left on day four, they had wrapped up the match, easing to a massive win. This was on the same pitch where England's bowlers failed to find any sort of purchase. True, the pitch hardly had anything for the bowlers, but Australia proved that it is not impossible to make things happen on a benign pitch.

A fair assessment of England's catastrophic performance in the Test would take one to the conclusion that the hosts lost the match in the mind. In both innings, they were batting under the pressure of huge scores, and succumbed to the same. They did not show any resolve to fight at all. If you take away the partnership between Alastair Cook and Ben Stokes in the first innings, England had nothing else to show for their efforts. Most of the other batsmen proved to be sitting ducks on a beauty of a batting pitch. Their effort in the second innings was even worse. They just gave up. 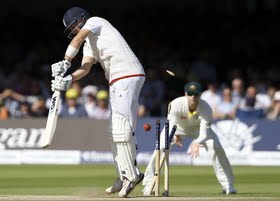 There would be plenty of worries for England heading into the third Test although they would take inspiration from Australia's effort at Lord's, who themselves fought back from a drubbing at Cardiff. Heading into the next game, England would have to seriously look at their batting. Adam Lyth has proved to be a walking wicket in the two Tests. Will England give him another go? Also Ian Bell and Gary Ballance got half-centuries at Cardiff, but they continue to look out of sorts, and both tasted failures at Lord's. Joe Root had a rare double failure, and the Test proved how much England depend on him.

Australia deserve a lot of praise for the manner in which they fought back. While the batting effort was superlative, it was their bowling performance on an unresponsive pitch that stood out. Unlike England's bowlers, Australia took the pitch out of the equation, and came up with a fiery bowling exhibition. Everyone contributed in some way or the other. The variety in Australia's bowling came to the fore during the Test. Mitchell Johnson was at his hostile best, Josh Hazelwood was McGrath-like accurate, Mitchell Marsh bowled with decent pace and fire, and was rewarded accordingly.

Australia's batsmen also played their part in the triumph although the task was easier for them given the surface. Still, Steven Smith batted like the champion we have known him to be over the last year or so. Chris Rogers proved that he may be retiring, but he is still capable of scoring big hundreds. Even David Warner, who failed in the first innings, made amends by putting up a better show in the second innings. Wicketkeeper Peter Nevill made an impressive debut, getting some runs, and taking catches as well. The one worry for Australia would be the form of their skipper Michael Clarke. Ashes 2015 though is alive and kicking.