Mumbai Indians and Kings XI Punjab, both of whom are coming off heartbreaking losses in their previous games, will take on each other in match number 13 of the Indian Premier League (IPL) on Thursday at Abu Dhabi. Mumbai came tantalizingly close to chasing down 202 against Royal Challengers Bangalore, but ended up faltering in the Super Over. Kings XI Punjab, on the other hand, were at the receiving end of a record chase of 224 by Rajasthan Royals. Both teams would look to lift themselves on Thursday.

Mumbai were never in the hunt against RCB until the young Ishan Kishan and the veteran Kieron Pollard featured in an incredible fighting partnership. Kishan was particularly brilliant, unlucky to be dismissed for 99 at the fag end of the chase, while Pollard demonstrated that he can still hit the ball a long way. Rohit Sharma, Quinton de Kock and Suryakumar had an off-day, but they will be expected to come good.

Although it is a bit too early, Mumbai will be worried with the poor form of their key paceman Jasprit Bumrah, who just hasn’t got his line an length right. James Pattinson too was disappointing in the last game, but Trent Boult and Rahul Chahar were highly impressive. 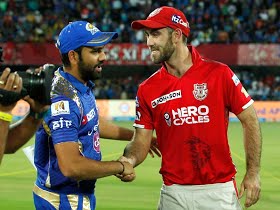 Shifting focus to KXIP, they batted incredibly well to post 223 against RR. The in-form openers Mayank Agarwal and skipper KL Rahul put on a mammoth 183, with Agarwal registering a ton this time and Rahul chipping in with 69. They will hope for bigger contributions from big-hitters Glenn Maxwell and Nicholas Pooran.

Punjab will be eager for significant improvement in the bowling, which was taken to the cleaners last game. Sheldon Cottrell conceded the famous five sixes in an over while Mohammed Shami too was taken for plenty even though he was among the wickets again. Except for leggie Ravi Bishnoi, the others failed to keep the runs down.

Head to Head Record: Mumbai Indians have a slight edge, having won 13 of 24 matches against Punjab, with the latter winning 11.

The surface at Abu Dhabi has something for both batsmen and bowlers. Delhi couldn’t chase 162 against SRH.

The weather will be hot. Maximum temperature will be 38 and humidity 37.