There is something about this present Pakistan T20 squad that is different from other teams that represented the country in various formats over the years.

There is something about this present Pakistan T20 squad that is different from other teams that represented the country in various formats over the years. Had an earlier Pakistan side been set a hefty target like the one Bangladesh got them to chase on Tuesday, they would have been expected to panic. The case for Pakistan batting collapse would have grown stronger considering the significance of the match -- a heavy defeat would mean being knocked out of the World T20. Contrary to it, the Pakistan openers came out all guns blazing, and seized the momentum in a matter of overs. 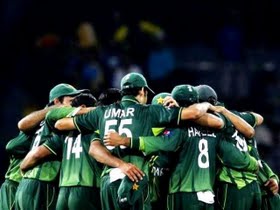 One can argue that the format makes it a lot simpler for the players; all they have to do is just go out and hit the ball. Yes, there is truth in the same, but only to an extent. After all, even as Imran Nazir was battering the bowling to all parts of the ground, skipper Mohammad Hafeez did now throw his bat around, and was content giving as much strike as possible to his rampaging partner. Through his sensible approach, Hafeez not only proved his maturity as a batsman, but also demonstrated that skills beyond big hitting are needed inthis format. Had Hafeez exited early, it wouldn’t have made a big difference to Nazir’s game plan, who would have continued attacking. But Hafeez’s presence did help Nazir get a better hang of the situation.

At the end of the day, it was Nazir’s exceptional batting talent and his fearless approach to the innings that played the key role in Pakistan getting over the line against Bangladesh. Nazir’s innings was pivotal not only in terms of the runs he scored. At the halfway stage, the Pakistan dressing room would have been gloomy following a lethargic bowling display. Their top bowlers were plundered to all parts of the ground, and they didn’t help their cause by dropping sitters, and seeming uninterested in the field. In such a dull scenario, they needed a bright spark to enlighten the proceedings. And what they got from Nazir was a firecracker of a performance. Pakistan still have a lot to ponder upon as they prepare for the Super Eights. But, for the moment, they can enjoy a well-earned victory against Bangladesh.

As for Mushfiqur Rahim’s men, they will be disappointed for sure, but they shouldn’t be disheartened. After all, they put in their best performance with the bat, and just did not have the talent in the bowling department to stop the hurricane named Nazir. They should be satisfied with their effort in the game, at least in the batting department. Shakib Al Hasan made up for his failure against NewZealand with a whirlwind knock that was on par with Nazir’s innings. As it often happens with Shakib though, he again ended up on the losing side.

The loss was proof that, the Asia Cup performance notwithstanding, Bangladesh still have catch up work to do.