Sri Lanka has today named a T20I Squad and an ODI Squad for its upcoming home series against New Zealand.

Sri Lanka has today named a T20I Squad and an ODI Squad for its upcoming home series against New Zealand. The Lankans host New Zealand for an Only T20I, 5 ODIs and 2 Test Matches. The tour kicks off with a lone T20I at Pallekele on the 30th of this month. Angelo Mathews takes over from Mahela Jayawardene as Sri Lanka’s new T20I Captain from this match.

The Selectors have rested Mahela Jayawardene and the newly appointed Vice-Captain in T20Is – Lasith Malinga from the Only T20I. In Malinga’s place, Nuwan Kulasekara has been named as Mathews’ deputy. Mahela returns for the ODIs continuing his role as Sri Lanka’s Captain. The point to be noted is that the Squad named is for the first three ODIs only. 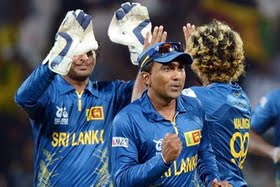 Off-spinner Ajantha Mendis misses out in both the squads. It doesn’t mean that the Selectors have dropped him but it is because the offie has been suffering from a side strain right from the World T20. Sri Lanka’s new mystery spinner Akila Dananjaya has not only retained his spot in the T20I Squad but also finds a place in the ODI squad. The Lankans have included a rookie in 19-year-old off-spinner Tharindu Kaushal, who was part of the Sri Lankan U-19 team in the recently held Colts World Cup in Australia. Kaushal though is yet to play even a single first class or List A cricket!