IPL 2016: Pune batsmen left too much to be done for late

Royal Challengers Bangalore put up yet another commanding performance with the bat to overcome the challenge of Rising Pune Supergiants at MCA Stadium in Pune. As always, Virat Kohli and AB de Villiers were expected to do the bulk of the scoring for Bangalore once they batted first. And, yet again they did not disappoint. Their bowlers then did reasonably enough to hold the opponents down. Pune’s batsmen fought hard after a poor start, but they had too big a score to chase in the end, and Bangalore were good enough to hold on.

After having conceded a big score of 185, Pune needed to get off to a swift start. Instead, they found themselves at 18 for 2 (effectively 18 for 3) as Kevin Pietersen had to go back retired hurt. Faf du Plessis was the one batsman who had been in great form for Pune, so his early dismissal was a big blow for the team. Things got worse as Steven Smith was run out, and the injury to Pietersen meant that the Pune innings was in complete disarray. It was the kind of start Pune did not want. 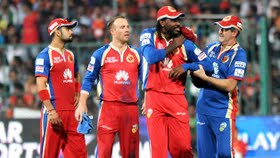 Following the early losses, Ajinkya Rahane kept the team in the hunt with a fluent half-century. He kept the team in with an outside chance, by finding the boundaries at frequent intervals, and also rotating the strike over well. But, he fell just as the team wanted him to carry on. Rahane featured in a steadying partnership with skipper MS Dhoni. However, in hindsight, Dhoni left the team with too much to do at the end. His 41 from 38 balls put them well behind in the race. The fact that they lost despite Thisara Perera’s 34 from 13 proves how much work was to be done.

Clearly though, it all again came down to the partnership between de Villiers and Kohli. It is amazing how many times this season they have rollicked away, and starred in RCB’s triumphs. Yet again, de Villiers was outstanding with his 83 coming from merely 46 balls. In that department, Kohli has proven to be lesser talented, hitting 80 from 63 balls. But, he clearly knows his role in the partnership. There were positives for Bangalore in the bowling as well, with Kane Richardson and Shane Watson returning with impressive figures.