Fresh from their second win against defending champions Chennai in Indian T20 Cricket , Mumbai Indians would be keenly looking forward to taking on Kolkata

Fresh from their second win against defending champions Chennai in Indian T20 Cricket , Mumbai Indians would be keenly looking forward to taking on Kolkata at Eden Gardens and knock them out of the edition. With 14 points from 11 matches, Mumbai has climbed to the second spot in the points table. In complete contrast, Kolkata has lost six games in a row and are all but out of the reckoning.

Although Mumbai beat a Dhoni-less Chennai in the previous encounter, it was a highly impressive encounter nonetheless. Rohit Sharma led from the front with his maiden fifty of the edition. There have been a lot of other good performances with the bat from Mumbai, mainly from Quinton de Kock, Kieron Pollard and the Pandya brothers -- Hardik in particular. 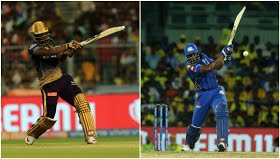 In the bowling, they have two of the very best yorker bowlers in master and pupil Lasith Malinga and Jasprit Bumrah. On different occasions, they have bowled the site to victories, proving their significance. It is now time for others to stand up and deliver as well.

As for Kolkata, their season just keeps getting worse. Six losses in a row is somewhat unprecedented. Dinesh Karthik was under pressure in the previous game against Rajasthan And while he answered critics with a scintillating 97, it wasn't enough for his team to register a win. Also, the debate over Andre Russell's batting position seems to have overshadowed his brilliance with the willow.

With the ball, the Pacers have struggled badly for Kolkata. Sunil Narine and Piyush Chawla did well with the ball claiming five wickets among them in the previous game. However, it wasn't enough and Riyan Parag and Jofra Archer took on the rest to seal the victory for Rajasthan. Kuldeep Yadav was again left out, a worrying sign for India ahead of the World Cup.