Having experienced contrasting fortunes in their previous one-day assignments, India and South Africa will lock horns in the first ODI of the three-match series at Dharamsala

Having experienced contrasting fortunes in their previous one-day assignments, India and South Africa will lock horns in the first ODI of the three-match series at Dharamsala on Thursday. While India went down to New Zealand 0-3 in what Virat Kohli described as a ‘not so relevant’ series, South Africa finally had something to cheer as they crushed the tough Aussie challenge by the same margin at home.

Playing at home though, India will be confident of turning things around. The series will be crucial for skipper Kohli in the wake of an abysmal New Zealand tour, where he managed only one fifty across the three formats. Kohli will have to raise his game since vice-captain Rohit Sharma remains ruled out owing to the calf injury picked up during the T20I series in New Zealand.

Kohli will look for support from comeback man Shikhar Dhawan and of course KL Rahul, who has been in the form of his life of late. Shreyas Iyer has settled in nicely into the playing eleven and the return of Hardik Pandya, who recently smashed two hundred in a T20 competition, will only bolster the batting. The series will also present Manish Pandey another opportunity to cement his place even as Rishabh Pant would be under pressure to stay relevant in the wake of Rahul keeping wickets. 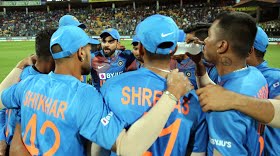 It will be a toss-up between Prithvi Shaw and Shubman Gill for Dhawan’s opening partner. While Shaw failed to convert his starts on the New Zealand tour, Gill played some handsome knocks during India A tour of New Zealand. In the bowling, Jasprit Bumrah will be under some pressure to deliver after a rare poor show in New Zealand. The series also marks the return of Bhuvneshwar Kumar from injury while the overworked Mohammed Shami has been rested.

As for South Africa, the visitors would be pleased with the form displayed by Heinrich Klaasen, Janneman Malan and Jon Jon Smuts in the whitewash of Australia. The experience of skipper Quinton de Kock and former captain Faf du Plessis should come in handy in India. In the bowling, the Proteas have been dealt a big blow with Kagiso Rabada's unavailability. They would, however, hope Lungi Ngidi and Anrich Nortje continue the impressive form they displayed against the Aussies.

Speaking of the weather, there is a slight chance of rain which may lead to interruptions. The team batting second at the venue has won three of the four games, so fielding first could be a popular choice. The dew factor might also come into play.

Meanwhile, South Africa head coach Mark Boucher was quoted as saying by ICC, "We have just beaten a very good team now. We needed confidence and it will certainly give us a lot of confidence. India is going to be a tough test. A lot of guys haven’t played a lot of cricket in India. What’s impressive is guys have responded to the messages we have sent out to them on batting and bowling perspective."