It could be a great move if India goes into its first Super Eights match, which is against Australia with three spinners! Australia will be no different to England when it comes to playing spinners.

It could be a great move if India goes into its first Super Eights match, which is against Australia with three spinners! Australia will be no different to England when it comes to playing spinners. The English batsmen employ the predetermined sweep shots to get away from the spinners and the Aussies tend to attack them with the slog sweeps. The common part is that both the nations have a history of struggling against the turning and bouncing ball. 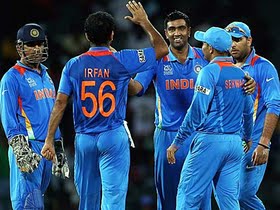 The spin combination of Harbhajan Singh and Piyush Chawla was extremely deadly in the English batsmen. The spin pair took seven wickets giving away very little in their eight overs. R Ashwin, India’s no.1 spinner in recent times will be back for the Australia match as expected. Harbhajan Singh too will make it to the XI following his grand success against England. It is likely that Zaheer Khan will be benched for the Australia match too as his form has been lackluster. Ashok Dinda should be eased out from the XI so that Piyush Chawla can retain his place. Piyush Chawla is an important player being a leg spinner he gets to turn the ball bigger than the fingers spinners. He will be handy against the right handers and his googly will be the wicket taking delivery.

If Virender Sehwag is fit, then he should come back in the team taking the place of Gautam Gambhir. I feel India can do away with Gambhir if Sehwag is fit. Virat Kohli can be promoted as the opener, a role which he played in the Chennai T20I against New Zealand recently with success. If Kohli moves up in the batting, then there will be scope for the likes of Rohit Sharma, Suresh Raina and Yuvraj Singh along with Skipper MS Dhoni to make an impact. What we have seen so far is that India hasn’t been in a position to use all its batting firepower. The batting is too deep for India in this short 20-over version of the game that some of them are just being underutilized.

On the bowling front, India will be left with two pace options in Irfan Pathan and L Balaji. R Ashwin could be used upfront opening the bowling with Irfan Pathan while asking Harbhajan Singh and Piyush Chawla to take care of the proceedings after the powerplay. If any of the five specialist bowlers have an off day, then there is enough back up options for Dhoni to fall on. He has atleast four part-time spinners and a little medium pacer in Virat Kohli to fill up the overs if necessary.

This three-spinner combination for India could work wonders against South Africa as well. For the Pakistan match, Piyush Chawla should be left and either Zaheer Khan or Ashok Dinda should be brought in.