Virat was and will always be the captain of the Test team: Ajinkya Rahane

Opening up on the captaincy debate, Ajinkya Rahane has said that Virat Kohli is his captain and will remain so. Rahane was speaking after the growing chorus over him to replace Kohli as Test skipper in the wake of his brilliant leadership Down Under. The 32-year-old took over from Kohli after the Adelaide loss and guided India to a famous 2-1 series triumph over Australia. India next take on England at home in a four-match Test series, with Kohli back at the helm of affairs and Rahane resuming his vice-captaincy duties

In an exclusive chat with PTI, Rahane reiterated, "Nothing changes. Virat was and will always be the captain of the Test team and I am his deputy. When he was absent it was my duty to lead the side and my responsibility to give my best for Team India's success.”

Rahane added that he is happy to chip in as captain as and when needed. "It's not the matter of merely being a captain. How you perform the captain's role is what's more important. So far I have been successful. Hopefully, in future also, I will try to give these kind of results for my team," he further said. 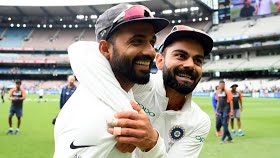 The Mumbaikar also asserted that he enjoys a cordial relation with Kohli. "Me and Virat have always shared a good bonding with each other. He has time and again praised my batting. Both of us played memorable knocks for our team in India and overseas conditions. It only helped that Virat comes at No.4 and myself at No.5. We have had a lot of partnerships," he went on to say.

According to Rahane, the two have always backed each other's game. He further said, “When we are at the crease, we discuss threadbare about opposition's bowling. We caution each other whenever one of us plays a rash shot."

India came back strongly to clinch the Border-Gavaskar Trophy after being all-out for 36 at Adelaide. They registered memorable wins at Melbourne and Gabba while drawing at the SCG.

They now face a confident England, who thrashed Sri Lanka 2-0 in Sri Lanka