On paper, Kolkata Knight Riders (KKR) always look the side with better ability when they take on Rajasthan Royals (RR). However, Rahul Dravid’s men have found a way to make the best of their talent especially when they have faced KKR over the last season.

On paper, Kolkata Knight Riders (KKR) always look the side with better ability when they take on Rajasthan Royals (RR). However, Rahul Dravid’s men have found a way to make the best of their talent especially when they have faced KKR over the last season. Even on Monday at the Sawai Mansingh Stadium (SMS) they weren’t at their best but did well enough with both bat and ball to overcome a floundering KKR. It was the kind of performance that would reemphasise their belief that they would be no pushovers this season as well.

Batting first, Royals did not get off to a convincing start, but Brad Hodge played a highly mature innings under the circumstances to rescue his side from troubled waters. Hodge came into bat when the Royals innings was going literally nowhere, but by the time they finished their allotted quota of overs, Hodge had managed to lead them to a fighting total. The Aussie veteran brought all his experience to the fore, rotating the strike at well, while also ensuring that the boundaries kept flowing at regular intervals. What Hodge did very well was not to throw his wicket away and stay at the crease till the very end. 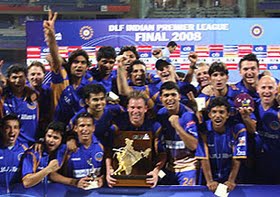 Hodge’s innings had only given the Royals a semblance of chance in the game. To get on top, their bowlers had their arduous task of overcoming the talented KKR line up. They were successful in doing the same courtesy some excellent bowling by all their bowlers. It was exactly what was needed as far as the Royals were concerned. Had only one or two bowlers done well for the Royals, KKR could have won the game considering the long batting line up they possessed. But, everyone from the little-known Rahul Shukla to the ever-impressive Kevon Cooper delivered to always keep KKR on the back foot.

Considering that KKR were not chasing a big score, early wickets were highly significant for the Royals. In that sense, the dismissal of Manvinder Bisla by Rahul Shukla set the tone of the innings for both teams. That KKR couldn’t chase down a gettable score had a lot to do with the fact that they could never forge a substantial partnership. The first-ball dismissal of Jacques Kallis, also by Shukla, was also instrumental in setting up the Royals’ win. Had Kallis got his eye in, he could have been the man who could have seen KKR through.

Medium pacer Siddharth Trivedi, who had a poor last game, came back strongly in this key clash. All the three wickets he picked up were big ones, that of KKR skipper Gautam Gambhir, Manoj Tiwary and Laxmi Shukla. Cooper also continued from his good form from the last game, proving what a major part he is of this Royals squad. Under the circumstances, Eoin Morgan played a wonderful hand for KKR, notching up a fluent half-century. The lack of support he received however hurt his side very badly.

Turning point of the game: After a poor start, Gambhir and Yusuf Pathan fell within a run of each other. With their dismissals, went KKR’s hopes.