Dhoni must go without being pushed out: Gavaskar has his say on MSD retirement debate

India legend Sunil Gavaskar is the latest to join the MS Dhoni retirement debate. In no uncertain terms, he has stated that Dhoni must hang up his boots

India legend Sunil Gavaskar is the latest to join the MS Dhoni retirement debate. In no uncertain terms, he has stated that Dhoni must hang up his boots from international cricket.

Dhoni has not turned up in a single international match for India since the team’s World Cup 2019 exit in the semi-final stage to New Zealand, in which he was run out for 50. The veteran wicket-keeper bat took some time out and joined the Indian Army, of which he is an honorary lieutenant colonel (Territorial Army). In the process, he missed India’s tour of West Indies and is not part of the current squad for the home series against South Africa as well.

Speaking to India Today, Gavaskar opined that the time has come to start looking beyond MS Dhoni. "Nobody knows to know what is in MSD's mind. Only he can clarify what he thinks his future with Indian cricket is. But I think with him being 38 now, India should be looking ahead. Because by the time the next T20 World Cup comes around he will be 39 years old," Sunil Gavaskar told India Today. 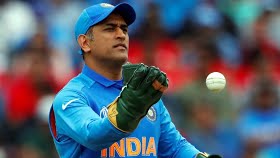 The debate over Dhoni’s retirement has been raging for a while with many asking him to retire, while few feel that he should be allowed to go on his own terms.

Gavaskar further stated that he wants Dhoni to call it quits on his own and is not pushed out. "Everybody has a shelf life and I do believe with the greatest of respect to Dhoni and I am a fan as millions of others; I just believe he should be going without being pushed out. He should be going on his own terms," the cricketer-turned-commentator told India Today.

Further, praising Dhoni’s contribution to the Indian team, Gavaskar admitted, "His value to the side is always going to be fantastic. Not just the runs he will score or the stumpings he will effect. But his overall presence on the field will be calming for the captain because the captain gets the benefit of his views. So that is a huge plus. But I do believe the time has come.”

In the same interview, Gavaskar went on to add that people should not be too harsh on Rishabh Pant and that he must be given some time to find his feet.

"Pant is a very good prospect. Look, the second year is always tough whether it is batsman or bowler and that's what he is finding out. People have a better idea about your strengths and weaknesses and therefore the bowlers will bowl accordingly. So I think he is facing second season blues. He has to keep his chin up," Gavaskar further told India Today.