Amla, Kallis tons a sign of things to come?

It is said that the first innings of a Test often sets the tone as to which way the series would progress. And if that logic is applied to what has transpired in the Brisbane Test so far...

It is said that the first innings of a Test often sets the tone as to which way the series would progress. And if that logic is applied to what has transpired in the Brisbane Test so far, South Africa definitely seem to possess the advantage. With three days gone, the match seems to be heading for a draw with a lot of time lost to rain, unless of course the Proteas can produce some brilliant bowling performances. But, irrespective of the result of the Brisbane Test, South Africa would be buoyed, at least by their batting performance thus far. 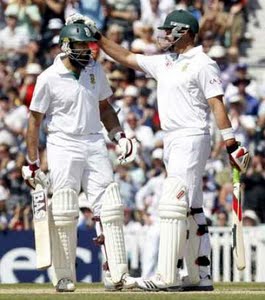 Hashim Amla and Jacques Kallis played excellent knocks in South Africa’s first inning score of exactly 450. Their partnership was a clear sign of South Africa’s dominance over the workmanlike Aussie bowling attack. Although some poor fielding aided the duo during their alliance, as far as the Australian bowling was concerned, they looked in no trouble at all, and built their innings around in an unhurried manner, which suggested that they had plenty of time to play their shots even against the faster men. Amla and Kallis’ tons were the highlights of day three without doubt, although, knowing Amla, he would have been disappointed falling immediately after crossing his century.

The worrying aspect for Australia would be that hardly any of their bowlers looked threatening during the Amla-Kallis partnership. These are the same set of bowlers who outdid India without having to break a sweat, but South Africa are distinctly a much more capable side with the bat. Ben Hilfenhaus, who grabbed plenty of wickets against the Indians, did claim a couple of wickets in South Africa’s first innings, but he needed to send down as many as 32.3 overs. Similarly, James Pattinson snared three wickets after bowling 34 overs while Peter Siddle managed only two wickets in 36 overs.

In comparison to the fast bowlers, it must be said that the spinner Nathan Lyon did a better job. The slower bowlers aren’t expected to pick up many wickets in the first innings on Australian wickets. Yet, the fact that Lyon also managed to pick up two wickets by sending down as many wickets as the pacers was an indication that the Australian pacers aren’t as good as they once used to be, at least not against a quality batting side like South Africa.

Having made 450 in the first innings of the opening Test, the visitors have gained the early advantage in the big series. They would be keen to continue doing the same through the rest of the series as well. With both sides having strong batting line-ups, the series could well be decided on who bowls better. Australia haven’t begun on a right note, but there is a long series ahead, and they would be keen to improve on their performance in the first innings at Brisbane. As for South Africa, they would be looking to keep the Aussie bowlers at bay throughout.