The Indian team’s capitulation in the first T20 against Pakistan at Bangalore was reassertion of the fact that they are struggling with their game big time, in all departments of the game and in all formats of the sport.

The Indian team’s capitulation in the first T20 against Pakistan at Bangalore was reassertion of the fact that they are struggling with their game big time, in all departments of the game and in all formats of the sport. After the disaster in the Tests, they had a chance to gain some confidencein the T20s against England. They had an opportunity to seal the series 2-0 in Mumbai, but instead faltered, and had to be satisfied by sharing the honours. Their latest loss, against Pakistan, after being in the ascendancy was further proof that they have forgotten the winning feeling.

Time and again in the recent past they have gotten into positions from where they could have dominated the game, but still ended up being second best. At Bangalore, they were off to as good a start as they could, but then collapsed as if they were in a position of extreme pressure. There were positives of course – Ajinkya Rahane getting the innings off to a solid start with some crisp shots, not resorting to slogs like he did in the T20s against England. Thanks to Rahane, Gautam Gambhirmanaged to play himself into some kind of form. At the end of the day though the negatives for India far outweighed the plusses. 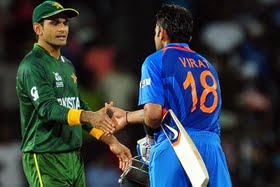 Once Rahane fell, it was imperative for Gambhir for hold his end at least for a few more overs till the incoming batsman got set. Instead, he ran himself out, adding to the two run outs he was involved in during the Tests. As it is, he isn’t contributing much to the team’s cause in the form of runs, and his run out spree isn’t helping matters at all. Gambhir is far from the dedicated batsman who bailed India out of trouble time and again till a few years back.

The rest were equally poor on the day. India were playing one extra batsman, with Ravindra Jadeja coming in at number eight instead of Ravichandran Ashwin, who was dropped. It was of no use though as all the batsmen fell one after the other without making any significant contribution. It may be argued that Ashwin’s contribution, if not with the ball then at least with the bat could have made a difference. But, as it is said if seven batsmen cannot win a game for you, eight definitely cannot.

The only time when India looked in control during their time in the field was when debutant Bhuvneshwar Kumar rocked the Pakistan top-order with a sensational spell of swing bowling. It was a debut that gladdened the hearts of Indians, for someone from the team had given the fans something to cheer about after a long time. It was too good to last though as the remaining bowlers were nowhere near as effective. To Pakistan’s credit, they held their nerve, with the ball and with the bat. They tided over the tough times, and preyed on India’s weaknesses to sneak home to a deserved win.