Amir Ali smashed a brilliant 32 from 17 balls as Oman came back from the brink to upset Ireland in a Group A match at Dharamsala on Wednesday. The end came in rather bizarre fashion as Max Sorensen bowled a no-ball full toss to hand over the match to the opposition. He had begun the final over in similar fashion, which Ali flashed through fine leg. It was the 17th over in which Tim Murtagh conceded 20 runs that turned the complexion of the game. Ali eased a four through third man, then lofted a full toss over cover, and finally got one out of the block hole to send it to the third man boundary. The match was well and alive. 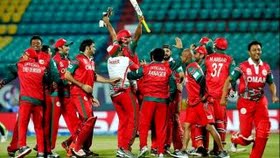 Oman began the chase of 155 in emphatic fashion as Khawar Ali and Zeeshan Maqsood added 69 for the first wicket 8.3 overs. However, once the partnership was broken, Ireland gained the ascendancy again, as Oman lost wickets in a heap. Maqsood began the chase in fine fashion for Oman as lofted Tim Murtagh for a four over mid-off, and then slashed one through midwicket, as two boundaries came in the opening over. That set a trend of sorts. Maqsood got stuck into Boyd Rankin, who was too short, and was spanked for three fours in an over. Ali joined in the act, blast Murtagh for a two fours in the fifth over.

When Kevin O’Brien was introduced into the attack, Ali greeted him by 6flat-batting him through backward square leg, and then depositing him into the stands. But, Kevin had his revenge when he got through Ali’s defence. The second big setback came when Maqsood played on to Kevin for 38. Andy McBrine dismissed Mehran Khan and Aamir Kaleem in the same over as Oman fell behind, but not for long.

Earlier, after a fantastic start provided by their openers, Ireland were restricted to 154 for 5. At one stage in their innings, Ireland had raced to 84 for 1 in the 12th over, after winning the toss and deciding to bat first. But, Munis Ansari claimed three big wickets to halt the momentum of the batting side. His wickets included that of the well-set Gary Wilson as well as the O’Brien brothers, Niall and the big-hitting Kevin, as Oman proved there are going to be no pushovers.

Ajay Lalcheta began proceedings for Oman on an impressive note, sending down the first over as a maiden. But, it did not take long for skipper William Porterfield and Paul Stirling to get into their groove. In the next over, Stirling drove Bilal Khan for two fours. A couple of overs later, he lofted Lalcheta over the field and swept him for fours in one over. Porterfield joined in the act when he hoicked Ansari for a four over backward square leg, and then danced down the track and smashed him into the stands for a six. Early advantage was definitely with Ireland.

It needed a stunning catch from Zeeshan Maqsood to bring an end to the bright opening stand of 48. The fielder at short cover flung himself to his left, and plucked the catch to send back Stirling for 29. Porterfield also fell for the same score, as he was stumped off Khawar Ali’s bowling, missing one from round the wicket. At the other end, Wilson kept the fours coming. He began by edging one to third man, and then slapping one through point, both off Aamer Ali. However, Ansari hit back for Oman, having Niall caught and backward square leg, and then cleaning up Wilson. In the last over, he bowled Kevin as well.