India fought back superbly from a disastrous position of 83 for 5 to end up Day 2 at 354 for 6 in the First Test at Eden Gardens. Rohit Sharma rescued the hosts with a century on Test Debut while getting admirable support from off-spinner R Ashwin, who is just eight runs short of his 2nd Test hundred.

Update at Stumps on Day 2: India fought back superbly from a disastrous position of 83 for 5 to end up Day 2 at 354 for 6 in the First Test at Eden Gardens. Rohit Sharma rescued the hosts with a century on Test Debut while getting admirable support from off-spinner R Ashwin, who is just eight runs short of his 2nd Test hundred.

The homeside are into a comfortable first innings lead of 120 runs thanks to the massive 198-run stand for the unbroken 7th wicket between Rohit and Ashwin. West Indies went wicketless in the final session as Rohit Sharma and R Ashwin looked in total control. Ashwin was once again impressive with his batting which has a close resemblance to VVS Laxman. Ashwin ended the day’s play with 92* from 148 balls with 10 fours. Rohit Sharma at the other end showed enough patience to become the 14th Indian batsman to score a century on Test Debut. Rohit remained not out on 127 from 228 balls with 16 fours and a six. 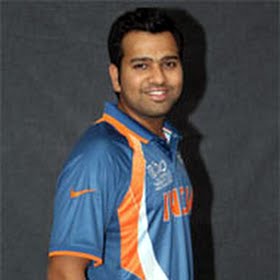 By the close of play, the West Indian attack was totally deflated having sent down 102 overs. Shane Shillingford lost his bite and had to toil hard for 41 overs with all his four wickets coming only in the morning session.

Update of Afternoon Session: Two solid partnerships involving Rohit Sharma helped India to inch towards West Indies’ first innings total. Rohit Sharma has worked hard to get to 61 not out in the company of R Ashwin, who is batting untroubled on 38. India are well placed at Tea with a total of 229 for 6 in 68 overs.

The hosts lost just the one wicket in the afternoon session that of MS Dhoni which was quite a contrast to the morning session. Dhoni batted well for his 42 (from 63 balls with 5 fours) before he succumbed to a poor drive off Tino Best’s outswinger. The Indian Captain added a crucial 73 runs with Rohit Sharma to rescue the hosts from an otherwise disastrous position.

Update of Morning Session: Little known off-spinner Shane Shillingford has put India in a mess at 120 for 5 by lunch on Day 2 as West Indies brought the Test match in balance. Sachin Tendulkar too became a victim of the off-spinner as India struggle to get to West Indies’ first innings total of 234.

Shillingford captured four out of the five wickets to fall while debutant fast bowler Sheldon Cottrell got the wicket of Pujara. India’s hopes are now on the pair of debutant Rohit Sharma (16*) and Skipper MS Dhoni (21*).

It was early success for West Indies as Sammy’s decision to open the day’s play with the off spin of Shane Shillingford proved right. Shikhar Dhawan (23) was the first casualty bowled off an inside edge in a forcing backfoot drive well away from his body to the off spinner in the 3rd over of the morning. Six overs later, Shillingford got Murali Vijay (26) jumping out of his crease and stumped out after deceiving him with a doosra.

India was in a spot of bother at 57 for 2 but the crowd was more than happy as the two wickets paved way to none other than Sachin Tendulkar. The Master Batsman struck the dangerous Shillingford for a couple of boundaries through mid wicket to announce his arrival but soon disappointed the crowd by misreading the offie’s doosra. Nigel Llong gave a brave lbw decision with Tendulkar (10 from 24 balls) struck on the backthigh in front of off, for the neutral it looked a decent call with the batsman in a bent position. For Tendulkar fans though, it was a poor Umpiring decision.

There was more trouble in store for India as Virat Kohli (3) got tamely caught bat pad unable to cope up with the turn and bounce from the off-spinner. India slipped to 83 for 5 before Dhoni with Rohit took the score to 120 for 5 by lunch in 39 overs.