Lanka vs Ire: Dasun Shanaka seems one for the future

In a low-profile ODI against Ireland on Thursday at Dublin, debutant Dasun Shanaka stood out, coming up with a brilliant all-round effort, to evaporate any hopes Ireland had of causing a shock upset. In his short international career,

In a low-profile ODI against Ireland on Thursday at Dublin, debutant Dasun Shanaka stood out, coming up with a brilliant all-round effort, to evaporate any hopes Ireland had of causing a shock upset. In his short international career, Shanaka has been known more as a bowler than a batsman, but he has proved to be a capable hitter on the domestic circuit, and gave some glimpses of the same on Thursday. Coming in to bat lower in the order, Shanaka needed just 19 balls to blast 42. Thanks to his assault, the Lankans crossed 300. With the ball, Shanaka again stood out to cap a memorable game.

Shanaka hasn't been a constant feature in the Sri Lankan outfit, but given opportunities, he has definitely grabbed them in impressive fashion. It may be recalled that Shanaka was called up to the Lankan national T20 squad, for a hastily arranged series in India prior to the WT20, and he surprised the Indians picking up three wickets on debut, as the hosts were upset against all odds. After a few forgettable games, he was then chosen for the first Test in Headingley. And, even as the team crumbled, Shanaka left an impression picking up three wickets, and big ones at that. It was a bit of a surprise that he was left out after that.

Ireland have always been a tough nation to beat for Test-playing teams, but Sri Lanka are also known to be slayers of the smaller nations in the shorter formats, and they kept their reputation in tact with a solid effort with bat and ball. Dinesh Chandimal's hundred must have been a big relief the team and the man himself. Although Chandimal got a hundred in the Test series against England, he hadn't got one in five years in one-dayers. For a man of his talent that is quite unacceptable, and this was made clear by Chandimal's reaction himself on reaching the landmark. The Lankans would be hoping that this current tour finally marks the coming of Chandimal.

Lanka's batting showed significant improvements in the last two Tests against England, and there were more signs of promise in the first match against Ireland as well. Apart from Chandimal and Shanaka's heroics, Kusal Mendis came up with a crucial half-century. The skipper Angelo Mathews himself contributed a crucial 49, as his team took complete control of the game. At the start, Kusal Perera made 32. There really wasn't much to fault with Lanka's batting effort. With the ball, Shanaka was just too good, and the rest just had to chip in support acts. Their fielding was atrocious though. 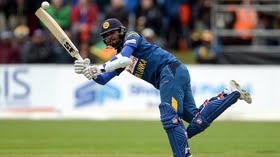 Shifting focus to Ireland, their bowling wears a weak look, with the likes of John Mooney and Trent Johnston having retired. Boyd Rankin's return from England has aides their cause, but they are still short of talent in the department. As such, they were depending heavily on their talented batsmen to pull them through. Skipper William Porterfield led from the front with 73, while Kevin O'Brien contributed an exciting yet lucky fifty. Besides the two though, there wasn't much in the form of contributions, as the Lankans proved significantly superior.