Toss: KKR have won the toss and elected to bat first 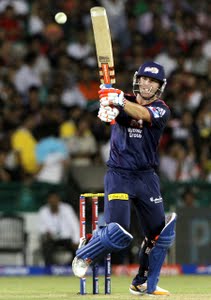 David Warner man of the match: Lovely wicket, and love to bat here. For the team I can bat anywhere and while I like to open the innings, this is what my team wants from me and that's where I will bat.

Gambhir: We need to play better cricket. Stupid on my part to get run-out like that. We need to take up responsibility, cannot be 60/6 at any stage. Need to pull up our socks. Cannot play well as a unit. Not been consistent as a team. We need to take each game as it comes and think it's a do-or-die situation.

Jayawardene: Handling situations much better than before, outstanding fielding and that makes a huge difference. Pushing ourselves and one game at a time. Guys working hard on our fielding and it's paying off. We need to look at one game at a time, cannot look too far ahead. This stadium is great and so is the crowd.

Gautam Gambhir won the toss and chose to bat in Raipur, but Mahela Jayawardene, the Delhi Daredevils captain, said it wouldn't matter as he expected the pitch stay the same. Daredevils, who won their last match at the venue, against Pune Warriors, did not tinker with their playing XI. Knight Riders made two changes. They brought back Brett Lee and Sumit Narwal in place of Brendon McCullum and Shami Ahmed.

Gautam Gambhir is the second highest run-getter in all IPLs, behind Suresh Raina, but he has hit the most fours: 280.

In nine matches, Daredevils' wicketkeepers put together have registered four dismissals, the worst per-match rate in the league.