The fortress of Chennai was invincible until Hardik Pandya blasted Negi for three sixes in the penultimate over to turn the game into Mumbai’s favour as Mumbai Indians thrashed Chennai Super Kings by six wickets at the Chepauk Stadium, Chennai. 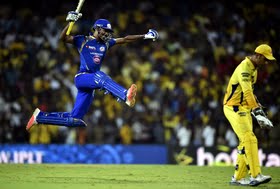 Chasing the par score of 159, Mumbai Indian’s openers started off well with scoring 61 runs without losing any wicket in the Powerplay. Opening pair of Parthiv Patel(45) and Lendl Simmons(38) scored at a brisk rate early against the fast bowlers knowing the fact that scoring wouldn’t be easy once ball get little older and spinner comes in operation. Batsmen did find it difficult to score after the field restrictions was over as they managed only 25 runs and lost three wickets in the next six overs. Skipper Rohit Sharma and Ambati Rayudu led the recovery and concentrated on the ones and two’s for few overs. Mumbai’s inning again gained the momentum when purple cap holder Ashish Nehra returned to bowl the 17th over. With two sixes and a four, Mumbai sneaked 17 runs of that over to reduce the equation to 34 off three overs.

The match was in control of Chennai until the 18th overs of the Mumbai’s inning. The decision to bowl Pawan Negi in the penultimate over of the match turned out to be a disaster for the Chennai Super Kings. He conceded 25 runs of the thirty runs needed in two overs which include four sixes. Mumbai needed only five runs in the final over which was never a tuff task and they completed the runs in with four deliveries to spare. Fast bowlers of CSK were very expensive and they neither stopped the flow of runs nor taken any wickets. Mumbai Indians batsmen were also helped by some ordinary fielding from the CSK’s fielders.

Earlier, Chennai Super Kings won the toss and opted to bat first on the wicket which was supposed to get slower as the game progresses. The inclusion of R Ashwin in the squad for Ishwar Panday again suggested that the pitch would assist spinners. CSK’s openers started the inning in same explosive manner as they have done throughout this season. But soon, McCullum was caught by Pandya at deep square leg as a result CSK were reduced to 44 for 1 in five overs. With some tight overs from Suchith, Chennai lost their plot in the middle overs. Raina and Smith soon departed in trying to play the big shot which didn’t come off. Pawan Negi was the star for CSK with the bat. He smashed 36 crucial run to add 54 runs with Dhoni and helped Chennai to put a respectable score of 158 runs on the board.

This is the fifth consecutive win for the Mumbai Indians in this season and they seem to be clicking at the right time. Courtesy of this win, Mumbai Indians have now jumped on the fourth spot while Chennai Super Kings are still on the top spot of the points Table.

Man of the Match: Hardik Pandya