Veteran England batsman Alastair Cook has admitted that he could have been dropped for the final Ashes Test had he not returned to form in Melbourne.

Cook totalled only 83 runs in six innings before the gigantic 244 not out on the third day of the fourth Test. "I always feel I have the backing of the selectors, but you have to deliver the goods. I hadn't done that on this tour. I would have been entitled to be dropped," Cook was quoted as saying in a BBC report.

Cook hadn’t passed 50 in his last 10 innings after the double century against West Indies in August. Cook batted for 633 minutes, and hit 27 fours 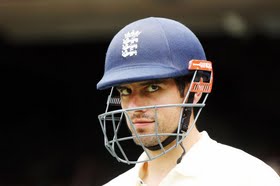 "On Wednesday night, it felt like one of the more emotional hundreds I have made, especially from where I'd been on this tour," said Cook.

"It meant a lot, then today I was quite proud to back it up. To get a real big one for the team was very important,” he added.