India decimated England by a record margin of 90 runs at the Premadasa Stadium! Bowling was said to be India’s biggest weakness going into this tournament and that was proved to be right in the opening game against minnows Afghanistan.

India decimated England by a record margin of 90 runs at the Premadasa Stadium! Bowling was said to be India’s biggest weakness going into this tournament and that was proved to be right in the opening game against minnows Afghanistan. But tonight it was the bowling of India with a different look to it that completely bamboozled the defending Champions England who were bundled out for just 80 in 14.4 overs!

Irfan Pathan struck twice in his opening spell to get the big wickets of Alex Hales (0, bowled in an attempted slog) and Luke Wright (6, lbw after missing a pull) to have England under early pressure at 18 for 2 by the 3rd over. Harbhajan Singh making a comeback in the team fired an arm ball which defeated a cut shot from Eoin Morgan (2) to hit timber in the 6th over. Harbhajan by now was using the doosra after hiding it for quite some years in the cupboard! He was totally a different bowler and leggie Piyush Chawla joined the party instantly as England started to crumble big time against the spin duo! 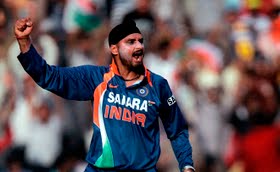 Not a single English batsman had any clue about playing Harbhajan and Piyush Chawla and in no time, the defending Champs were on the brink of an embarrassing defeat! Harbhajan got the Man of the Match for his deadly figures of 4-2-12-4. Piyush Chawla also made a strong point about his place in the XI with figures of 4-1-13-2. Now will India play these two spinners along with the dependable R Ashwin in the XI for the future games remains to be the big mystery!

India Innings: India finished with a competitive total of 170 for 4 against England at Colombo. Rohit Sharma top scored for India with a well struck 55* (from 33 balls with 5 fours and a six) under pressure. The innings was given a solid launchpad by the duo of Gautam Gambhir (45 from 38 balls with 5 fours) and Virat Kohli (40 from 32 balls with 6 fours).

It was a new opening combination for India as Irfan Pathan joined Gautam Gambhir, an experiment that failed in no time. The arrival of Virat Kohli saw even the sharp English pace attack looking ordinary as flowing shots came through in all directions. Gambhir was slightly slow but managed to keep up the tempo with Kohli. India got to a nice foundation of 81 for 2 in 10.3 overs when Virat Kohli (40 from 32 balls with 6 fours) dragged a big shot off Graeme Swann into the outfield.

India lost its steam after Kohli’s exit and moved on slowly to 119 for 3 when Gautam Gambhir (45 from 38 balls with 5 fours) got caught behind off Finn in the 16th over. Rohit Sharma at this juncture came up with a crucial fifty to wrap up Indian innings at 170 for 4. India didn’t even have to use the services of Yuvraj Singh with the bat. For England, Graeme Swann produced great figures of 4-0-17-1.

Toss and Teams: England have won the toss and asked India to bat first in the inconsequential Group A match at the R Premadasa Stadium in Colombo. The match holds no significance as both England and India have already made it into the Super Eights.

India have made as many as three changes to their line-up and thus giving the players on the bench the opportunity to play tonight. The four players missing out for them are Sehwag, Zaheer, Ashwin and the unlucky Manoj Tiwary . England have made one change with Tim Bresnan coming in for Samit Patel.